Chris Hedges: A Haven from the Animal Holocaust

WATKINS GLEN, N.Y.—There are mornings when Susie Coston, walking up to the gate of this bucolic farm in her rubber boots, finds crates of pigs, sheep, chickens, goats, geese or turkeys on the dirt road. Sometimes there are notes with the crates letting her know that the animals are sick or injured. The animals, often barely able to stand when taken from the crates, have been rescued from huge industrial or factory farms by activists.

The crates are delivered anonymously under the cover of darkness. This is because those who liberate animals from factory farms are considered terrorists under U.S. law. If caught, they can get a 10-year prison term and a $250,000 fine under the Animal Enterprise Terrorism Act. That is the punishment faced by two activists who were arrested in Oakland, Calif., last month and charged with freeing more than 5,700 minks in 2013, destroying breeding records and vandalizing other property of the fur industry.

Only in the insanity of corporate America can nonviolent animal rights activists be charged as terrorists while a white supremacist who gunned down African-Americans in a South Carolina church is charged on criminal counts. Only in the insanity of America can Wall Street financers implode the global economy through massive acts of fraud, causing widespread suffering, and be rewarded with trillions of dollars in government bailouts. Only in the insanity of America can government leaders wage wars that are defined as criminal acts of aggression under international law and then remain, unchallenged, in positions of power and influence. All this makes no sense in an open society. But it makes perfect sense in our species of corporate totalitarianism, in which life, especially the life of the vulnerable, is expendable and corporate profit alone is protected and sanctified as the highest good.

The animal agriculture industry causes suffering, death and environmental degradation—to humans as well as animals—on a scale equaled only by the arms industry and the fossil fuel industry. And by eating meat and dairy products we aid and abet a system that is perhaps the primary cause of global warming and is pumping toxins and poisons into our bodies and the rest of the ecosystem.

Animal agriculture sends more greenhouse gas emissions into the atmosphere than worldwide transportation. The waste and flatulence from livestock are responsible for creating at least 32,000 million tons of carbon dioxide per year, or 51 percent of all worldwide greenhouse gas emissions. Livestock causes 65 percent of all emissions of anthropogenic nitrous oxide, a greenhouse gas 296 times more destructive than carbon dioxide. Crops raised to feed livestock consume 56 percent of the water used in the United States. Seventy percent of the crops we grow in the U.S. are fed to animals. Eighty percent of the world’s soy crop is fed to animals. It is a flagrant waste of precious and diminishing resources. It takes 1,000 gallons of water to produce one gallon of milk.

Farm Sanctuary in Watkins Glen—which the government briefly listed as an “extremist” animal rights group in the early 1990s—is probably the world’s most lavish retirement home for farm animals. Gene Baur and Lorri Houston founded it. They raised money to create Farm Sanctuary, and to pass out literature about the abuse of animals at the hands of factory farm operators, by selling vegan hot dogs from a Volkswagen van at Grateful Dead concerts. In all, they drove their van to the parking lots outside nearly 100 concerts across the country. The first animal they rescued was a sheep, later named Hilda, found lying in a pile of dead animals behind a stockyard.

“Farm Sanctuary begins with the idea that there’s this horrible system and most people are unwittingly supporting it by buying animal-based foods,” Baur said when I reached him by phone at his home in Arlington, Va.

“We can only rescue a small handful compared to the billions who deserve to be rescued,” he said. “So we try to model and encourage a new kind of relationship with animals. Rescuing individuals also helped us cope with the horrors of factory farming. Going into these places we would see atrocious abuse. We would witness thousands of animals confined in horrible conditions, held in crates where they couldn’t even turn around. This takes a toll on you emotionally. Being able to rescue a few individuals out of that system helped heal us. Farm Sanctuary is a place of hope. It is a place of transformation. Animals who had been terribly mistreated, and seen only as production units, as commodities, have their lives transformed. They become our friends, instead of our food. You can’t rescue them all, but you do what you can. Farm animal rescue is an immediate concrete response to an untenable chronic problem.”

Farm Sanctuary, which operates through donations, has a budget of $10 million a year and runs two farms in California besides the one in New York state. [continue reading] 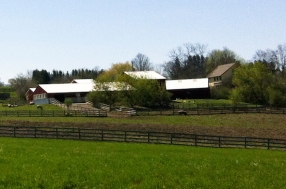 One comment on “Chris Hedges: A Haven from the Animal Holocaust”