Siegfried Sassoon: “Finished with the War — A Soldier’s Declaration”

In July of 1917, mid-World War I, following a period of convalescent leave during which he had decided to make a stand by not returning to duty, celebrated poet Siegfried Sassoon sent the following open letter to his commanding officer and refused to return to the trenches. The reaction was widespread, thanks to copies of the controversial letter — titled “Finished with the War: A Soldier’s Declaration” — reaching local newspapers, the House of Commons (where it was read out by Hastings Lees-Smith), and eventually the London Times.

Indeed, Sassoon didn’t return to the war and only escaped a court-martial as a result of his being declared unfit for service and treated for shell-shock.

Here is the letter, published in the Times on July 31, 1917. Since Siegfried Sassoon was a war hero, publication of the letter caused a furor and questions were asked in the Houses of Parliament:

“I am making this statement as an act of willful defiance of military authority, because I believe the war is being deliberately prolonged by those who have the power to end it.

I am a soldier, convinced that I am acting on behalf of soldiers. I believe that this war, upon which I entered as a war of defence and liberation has now become a war of aggression and conquest. I believe that the purposes for which I and my fellow soldiers entered upon this war should have been so clearly stated as to have made it impossible to change them, and that, had this been done, the objects witch actuated us would now be attainable by negotiation.

I have seen and endured the suffering of the troops, and I can no longer be a party to prolong these sufferings for ends which I believe to be evil and unjust. I am not protesting against the conduct of the war, but against the political errors and insincerity’s for which the fighting men are being sacrificed.

On behalf of those who are suffering now I make this protest against the deception which is being practised on them; also I believe that I may help to destroy the callous complacence with which the majority of those at home regard the continuance of agonies which they do not share, and which they have not sufficient imagination to realise.” 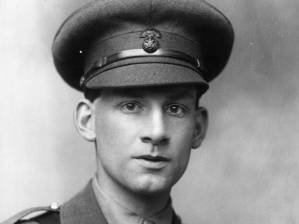 Siegfried Sassoon (1886 – 1967) was an English poet, writer, and soldier. Decorated for bravery on the Western Front, he became one of the leading poets of the First World War. His poetry both described the horrors of the trenches and satirized the patriotic pretensions of those who were responsible for the war. Sassoon became a focal point for dissent within the armed forces when he protested the war in his “Soldier’s Declaration” of 1917, culminating in his admission to a mental hospital. There he became friends with Wilfred Owen who was greatly influenced by him. Sassoon later won acclaim for his three-volume fictionalised autobiography, collectively known as the “Sherston trilogy”.

3 comments on “Siegfried Sassoon: “Finished with the War — A Soldier’s Declaration””

This entry was posted on December 21, 2014 by Vox Populi in Poetry and tagged "Finished with the War -- A Soldier’s Declaration", conscientious objectors, Personal Essays, Poetry, Siegfried Sassoon, war, War and Peace, World War !.