Siegfried Sassoon: The Poet As Hero

You’ve heard me, scornful, harsh, and discontented,
Mocking and loathing War: you’ve asked me why
Of my old, silly sweetness I’ve repented–
My ecstasies changed to an ugly cry.

You are aware that once I sought the Grail,
Riding in armour bright, serene and strong;
And it was told that through my infant wail
There rose immortal semblances of song.

But now I’ve said good-bye to Galahad,
And am no more the knight of dreams and show:
For lust and senseless hatred make me glad,
And my killed friends are with me where I go.
Wound for red wound I burn to smite their wrongs;
And there is absolution in my songs.

Siegfried Loraine Sassoon (1886 – 1967) was an English poet, writer, and soldier. Decorated for bravery on the Western Front, he became one of the leading poets of the First World War. His poetry both described the horrors of the trenches and satirized the patriotic pretensions of those who, in Sassoon’s view, were responsible for a jingoism-fuelled war. Sassoon became a focal point for dissent within the armed forces when he made a lone protest against the continuation of the war in his “Finished with the War — A Soldier’s Declaration” of 1917, culminating in his admission to a military psychiatric hospital; this resulted in his forming a friendship with Wilfred Owen, who was greatly influenced by him. Sassoon later won acclaim for his prose work, notably his three-volume fictionalized autobiography, collectively known as the “Sherston trilogy”.
. 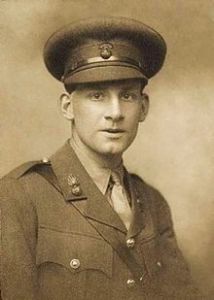 One comment on “Siegfried Sassoon: The Poet As Hero”

This entry was posted on October 15, 2016 by Vox Populi in Opinion Leaders, Poetry, War and Peace and tagged Siegfried Sassoon, The Poet as Hero.