Old legend whispers them, bent-backed, crook-kneed from the nest

of their military graves

in the low-ground cemetery by the river. They hobble a clacking

no mortal can count as they parade the lip, fleshless sentries assigned

to the endless river,

parody of the military formations they once were. They vanish from sight

at the instant one believes

they are visible. I knew some who lived near that river, who ventured

in search of their parade

in the hours when churches lock their doors. And one told stories of an uncle

who’d been in wars,

who had visited places where there are festivals for the dead. Each family

it can afford, welcomes anyone who comes to the door. Later there is drinking

and dancing in streets

crowded with bodies. But the dead have their own music and march forth

only once a year.

Their dance is tied to a calendar we can’t read. So no one sees them on

the story another year to age. And those who have left youth behind stay away,

knowing that soon enough they will

join that procession and walk on bones softened with mud, gone weak between 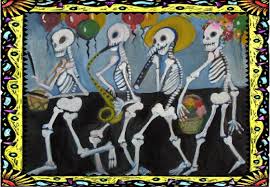 This entry was posted on October 31, 2018 by Vox Populi in Poetry, War and Peace and tagged Al Maginnes, Halloween poetry, Ruth Olivar Millan, The Skeleton Parade.