Recently, PBS aired a documentary marking the hundredth anniversary of the end of World War I. Almost in passing, a memoir by Mary Borden who founded a hospital and served as a nurse, was quoted:

There are no men here, so why should I be a woman? There are heads and knees and mangled testicles. There are chests with holes as big as your fist, and pulpy thighs, shapeless; and stumps where legs once were fastened. There are eyes—eyes of sick dogs, sick cats, blind eyes, eyes of delirium; and mouths that cannot articulate; and parts of faces—the nose gone, or the jaw. There are these things, but no men; so how could I be a woman here and not die of it? Sometimes, suddenly, all in an instant, a man looks up at me from the shambles, a man’s eyes signal or a voice calls “Sister! Sister!” Sometimes suddenly a smile flickers on a pillow, white, blinding, burning, and I die of it. I feel myself dying again. It is impossible to be a woman here. One must be dead.

Certainly they were men once. But now they are no longer men.

If there is such a thing as a near-forgotten masterpiece, it would be The Forbidden Zone by Mary Borden. At her best, her prose should be set alongside All Quiet On The Western Front, and her poetry alongside “Dulce et decorum est.”

Much of Borden’s early life was a rebellion against the expectations of Victorian womanhood and the constrictions of Evangelicalism. Born during 1886 in Chicago, her family’s vast wealth came from Colorado mining. Her mother became part of an evangelical group that Borden found stifling. To get away form all that, after she graduated from Vassar in 1907, she set off on a world tour. In India, she met and married a missionary, with whom she had three daughters in rapid succession. This marriage proved to be equally stifling. She eventually divorced, and, sadly, lost custody of her children.

In 1913, she moved to Britain, where she became involved in the suffragette movement, and began to publish. She was soon associating with writers like Ford Madox Ford, E. M. Forster, George Bernard Shaw and Ezra Pound. She became the lover of the painter, Wyndham Lewis.

Most of her life was very upper class. Much of her writing reflects the fashion and wealth of that milieu. In many ways, she never really broke from her past – except once.

At the outbreak of the First World War in 1914, she used her own considerable wealth to equip and staff a field hospital for French soldiers close to the Front, a hospital in which she served as a nurse throughout the war. This is where she wrote most of The Forbidden Zone.

She says in her preface –

I have called the collection of fragments “The Forbidden Zone” because the strip of land immediately behind the zone of fire where I was stationed went by that name in the French Army. We were moved up and down inside it; our hospital unit was shifted from Flanders to the Somme, then to Champagne, and then back again to Belgium, but we never left “La Zone Interdite.”

The War Department at first censored her writing. When she finally published in 1929, there was a bit of bad timing. The Forbidden Zone was published the same year as A Farewell to Arms, Good-Bye to All That and All Quiet on the Western Front. Also there were published, at about the same time, many other books about the war. For example, Revolt In The Desert, an abridged version of T. E. Lawrence’s Seven Pillars Of Wisdom, was published not long before Borden’s book. Siegfried Sassoon’s most famous prose works, Memoirs Of A Fox-Hunting Man and Memoirs Of An Infantry Officer, were published in 1928 and 1930 respectively. That said, since The Forbidden Zone was first published, the book has never been out of print. She is not completely unknown, but she is overshadowed.

For her courage, the French military awarded Mary Borden the Croix de Guerre, one of their highest honors.

ALL these little men coming out of their boxes along the road—.

The boxes are oblong. They stand on end by the ragged ditches. The men pop out of the boxes into the middle of the road. They are blurred and shapeless. They wave dirty flags in weary warning. A motor car slows up and stops before the box. The languid menace of these figures stops it; their joyless power holds it with its engines panting.

The coats of the little men who come out of the boxes are too big for them; their rifles with the bayonets are too heavy. The light of the sky in the daytime is too strong, and the darkness of the night is too dark, and the many motors that pass the barriers are too many. The vague vast meaning of their minute task is too much for them.

It is stupid to live in an oblong box in a ditch, and to pop out at the sound of a motor and wave a flag and look at a piece of blue paper or a piece of pink paper with writing on it that is hard to read. There is a name written on the paper, but how is one to know whether the name written on the paper is the name that was given to the man in the motor by his parents when he was a baby in a cradle? How is one to know? It is one’s business to look at the paper and at the man’s face. What good does that do? What does it matter? It is one’s duty to look at the paper. It is one’s duty to look at the man. It is one’s duty to find out where he has come from and where he is going. La Panne, Dunkerque, Bourburg, Calais, Boulogne; Boulogne, Calais, Bourburg, Dunkerque, La Panne, it is always the same. It is always written there on the paper, with the stamp and the signature of some well-educated officer who sits in some warm room before piles of papers. These papers wander out from his room along the road.

All these motors and all these scornful men that stop to show impatient papers will disappear up the road for ever. Even those who come down the road will go up again and will be destroyed and will never come back. So it is good to be in the box. As long as one is in the box one will not be destroyed. These fools who are angry because they are stopped on the road that leads to the war, they will be destroyed. The generals who do not look and the colonels who glance sideways, and the lieutenants who make bad jokes—the English and the French and the Belgians—they will all be destroyed.

They wear fine uniforms. Their faces are clean. They have been eating good food. They receive back their papers disdainfully. They wear gloves. They will be destroyed with their gold braid and their medals and the good food inside them.

Their motors dash off flinging mud into the face from their hind wheels. They disappear. The road is empty.

THE SONG OF THE MUD

This is the song of the mud,

The pale yellow glistening mud that covers the hills like satin;

The grey gleaming silvery mud that is spread like enamel over the valleys;

The thick elastic mud that is kneaded and pounded and squeezed under the hoofs of the horses;

The invincible, inexhaustible mud of the war zone.

This is the song of the mud, the uniform of the poilu.

His coat is of mud, his great dragging flapping coat, that is too big for him and too heavy;

His coat that once was blue and now is grey and stiff with the mud that cakes to it.

This is the mud that clothes him. His trousers and boots are of mud,

And his skin is of mud;

And there is mud in his beard.

His head is crowned with a helmet of mud.

He wears it well.

He wears it as a king wears the ermine that bores him.

He has set a new style in clothing;

He has introduced the chic of mud.

This is the song of the mud that wriggles its way into battle.

The impertinent, the intrusive, the ubiquitous, the unwelcome,

That fills the trenches,

That mixes in with the food of the soldiers,

That spoils the working of motors and crawls into their secret parts,

That spreads itself over the guns,

That has no respect for destruction and muzzles the bursting shells;

Soaks up the power of armies;

Soaks up the battle.

Just soaks it up and thus stops it.

This is the hymn of mud –  the obscene, the filthy, the putrid,

The vast liquid grave of our armies. It has drowned our men.

Its monstrous distended belly reeks with the undigested dead.

Our men have gone into it, sinking slowly, and struggling and slowly disappearing.

Slowly, inch by inch, they have gone down into it,

Slowly, irresistibly, it drew them down, sucked them down,

And they were drowned in thick, bitter, heaving mud.

Now it hides them, Oh, so many of them!

Under its smooth glistening surface it is hiding them blandly.

There is not a trace of them.

There is no mark where they went down.

The mute enormous mouth of the mud has closed over them.

This is the song of the mud,

The beautiful glistening golden mud that covers the hills like satin;

The mysterious gleaming silvery mud that is spread like enamel over the valleys.

Mud, the disguise of the war zone;

Mud, the mantle of battles;

Mud, the smooth fluid grave of our soldiers:

This is the song of the mud.

For more about the life and writings of Mary Borden, click here. 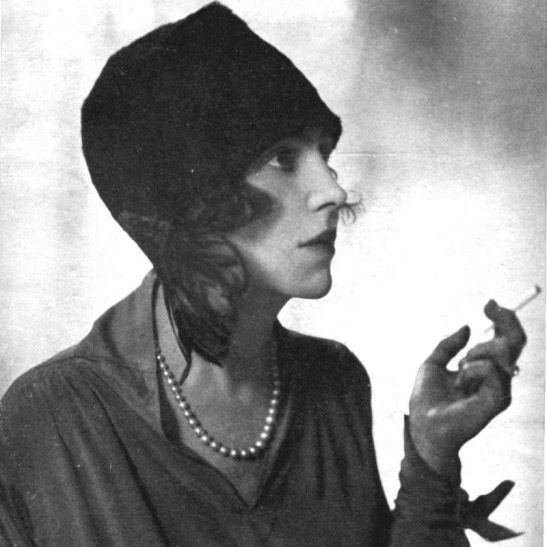 From Mary Borden: A Woman of Two Wars 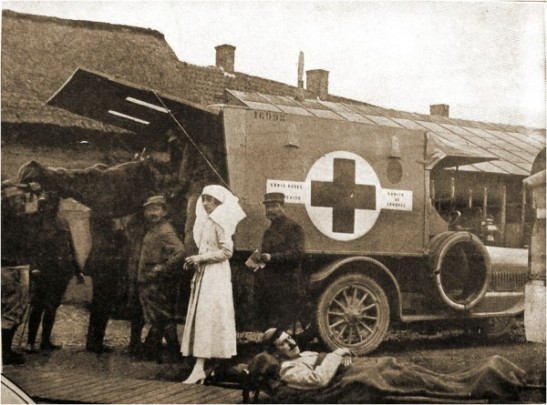 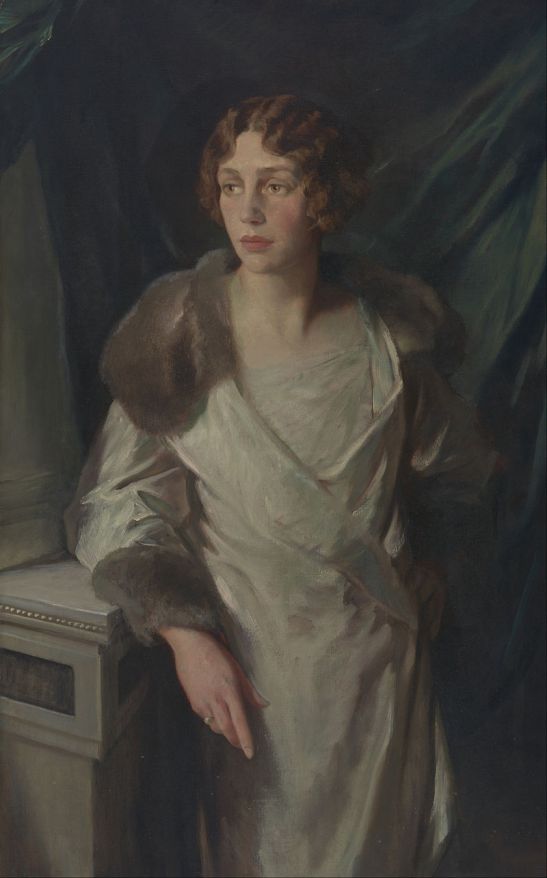