John Samuel Tieman: To mourn the man by name

As we approach the 100th anniversary of the end of World War I, it is easy to think of all that as distant. Distant and perhaps overwhelming with its 41 million casualties.

In the Commonwealth Of Nations, November the 11th is called Remembrance Day. The act of remembering is a solitary thing. It does not do the remembered good or ill. But the memory matters. Regardless of politics right or left, war will never end unless we remember, by name, those who died.

So let me tell you a little story of one of the 4.1 million French soldiers who lost their lives.

Guillaume Apollinaire was one of the best known poets and essayists of his age. Perhaps more importantly, he knew how to be both intimate friend and genial companion. His friends included Pablo Picasso, Henri Rousseau, Max Jacob, André Breton, Pierre Reverdy, Juan Gris, Alexandra Exter, Jean Cocteau, Erik Satie, Leo Stein, Marc Chagall, Marcel Duchamp. He was the lover of cubist painter Marie Laurencin, who is often identified as his muse. He is a notable figure in Gertrude Stein’s The Autobiography Of Alice B. Toklas.

He was one of his era’s great characters. Apollinaire was accused of stealing the “Mona Lisa”. An unreliable rumor, but one he never disavowed, had it that he was the son of a Vatican cardinal and a Polish noblewoman. He coined the terms “surrealism” and “cubism”.

The poet was also an artillery officer, a sous-lieutenant,a second lieutenant in the 96thInfantry Regiment. He was wounded by shrapnel to his temple on 17 March 1916.

He tells of his astonishment at his wound. How he was sitting some distance behind the lines, at his artillery piece, sitting beneath a tree. He was reading a newspaper. He suddenly found himself paralyzed, with blood dripping on to his paper — and no sense at all of what happened. Some distant shell, perhaps half a mile away, flung a bit a shrapnel into the air, and that bit of iron found one of the finest minds of the 20th century. He was trepanned, and given medical leave from the army. Lt. Apollinaire never fully recovered.

Thus weakened, he easily succumbed to the Spanish Flu on 9 November 1918, two days before the war ended. He was 38.

It is easy to think of Apollinaire and his friends as larger than life. But it is just as easy to see them as friends, lovers, just folks who happened to have the life of the mind as their work and play.

There is a charming, pre-war little video that survives of Apollinaire and André Rouveyre, the writer and graphic artist. There is nothing particularly special about it, beyond the mere fact that these men were friends. And the charm of seeing someone else in that position we’ve all been in, the one where someone says, “Hey, just stand there and act casual while I photograph you.”

There is a another photo taken not long after that. One of the soldier just days after the wound. He is in bed, his eyes blackened, his face swollen.

There is a photo of the husband and wife on the terrace of their apartment at 202 Boulevard Saint-Germaine in Paris. He is in uniform. He does not wear a bandage. His hair has grown back, and his face isn’t swollen. He seems happy, as does she. The apartment is modest, although, as any newlywed knows, where there is love, any apartment is a palace. They would remain newlyweds, as their marriage would last less than six months.

The lieutenant was given a military funeral. It is easy to think of the attendees as a Who’s Who of the avant-garde. But a more accurate description would include a grieving mother, a dissociative Picasso, the quite moan and the sudden bust of weeping, the honor guard as weary of funeral as of battle.

He was interred in the Père Lachaise Cemetery. There is a photograph of his corpse.

It is well that we remember the last lament of his wife heard only by God in that little apartment that November night. In 1967, she would be buried beside him.

Let us also remember that, when the shrapnel found the brain of Guillaume Apollinaire, it also found the heart of his mother, Angelika.

Or think of  André Rouveyre, the friend in the film. On 20 August 1915, Apollinaire wrote him this poem, translated here by Oliver Bernard, on a postcard from the Western Front. Think of 1920, 1925, think of 1955 and Rouveyre reading —

I write to you beneath this tent

While the summer day becomes a shade

Flowers of the cannonade

And before existing fade 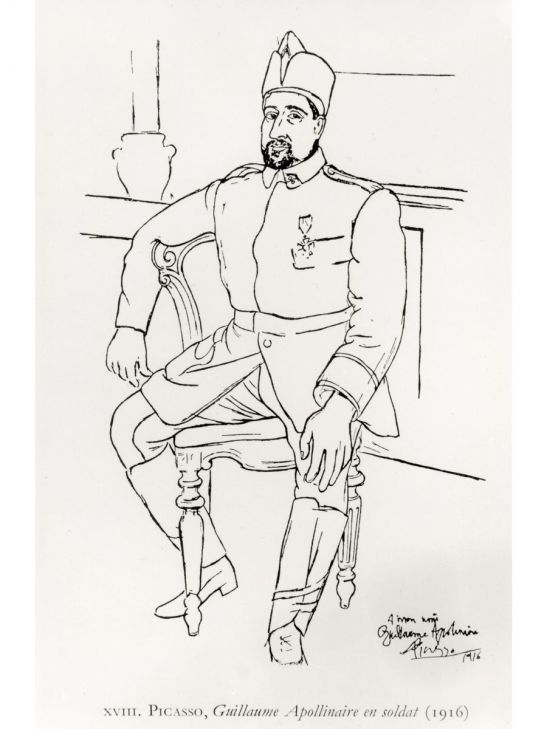 Apollinaire recovering in the hospital

Apollinaire and his wife Jacqueline Kolb when his wounds were healing