Video: The Man is the Music

‘Everything that I’ve experienced, I’ve made a piece of art to go along with it.’ Prolific artist, musician and lover of Mother Earth, Lonnie Holley treasures the discarded. Nurturing the neglected, he finds healing in the transformative power of art.

Lonnie Holley was born in 1950, the seventh of 27 children in an African-American family in Jim Crow-era Birmingham, Alabama. The short documentary immerses itself in his world, from a childhood wracked with trauma, poverty and neglect to his work as a folk artist, musician and arts educator who engages with his history of hardship in ways that are both bracingly concrete and poetically resonant. Holley creates found-object art, which returns value and meaning to materials that have been discarded and deemed worthless. His music is imbued with a sound born out of ‘moaning and groaning’ during lonely times. And he teaches art classes at a local school with a love that reflects his belief in the importance of nurturing children so they can flourish. In the past few decades, Holley has moved from being somewhat of an outsider to an artist of increasing acclaim: his works have been displayed at the Smithsonian American Art Museum, the United Nations and even in the White House Rose Garden. Rendered in rich black and white, The Man Is the Music finds Holley exploring how his traumas and worldview underpin a practice that he calls ‘improvisational creativity’. 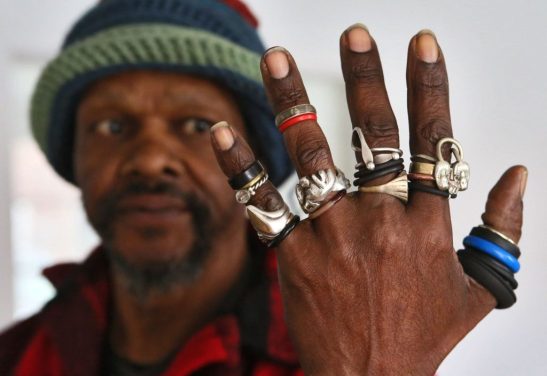 One comment on “Video: The Man is the Music”