Michael Pence reminds me of the character Andy Dufresne in Shawshank Redemption, who swims through a river of shit and comes out the end of the pipe, squeaky clean.  Except Pence is still swimming.  And he claims to know nothing at all about any sewer.

Michael Flynn has flipped and is working closely with the Mueller team. It is clear that several threads lead back to Kushner, Donald Trump Jr., and even Donald Trump.  Sources indicate that Kushner was the person who directed Flynn to contact member nations of the UN Security Council to request a delay in a vote to condemn Israel for their expansion of west bank settlements. Flynn also communicated with the Russians several times to ask them to refrain from retaliating for Obama’s placing of sanctions on Russia for their interference in the election. Flynn apparently reassured the Russians that Trump’s administration would not put those sanctions in place.  Along with Flynn, Kushner appears to be in serious legal trouble.

Trump Jr., as shown by his own emails, conspired with WikiLeaks to enable widespread Russian interference in the election by releasing Clinton’s stolen (and often doctored) emails.  This would be blatantly illegal. Trump Jr. also shared these emails with Steve Bannon, Kellyanne Conway, Brad Parscale, Jared Kushner, and Hope Hicks, possibly implicating them all. There is no evidence that any of these people warned Trump Jr. of the possible legal consequences.

WikiLeaks and Trump Jr. communicated over a ten-month period, and within that timeframe, in June of 2016, Trump Jr., Kushner, and Manafort met in Trump Tower with Russian attorney and government representative Natalia Veselnitskaya and with Irakly Kaveladze, a representative of two ultra wealthy Russian real estate moguls Aras and Emin Agalarov. These particular attendees strongly suggest the meeting’s purpose for the Russians was to get agreement that if Trump became president and lifted all sanctions on Russia, there would be a big payback in real estate deals for Trump.  Trump has tried repeatedly to build hotels in Russia for 30 years, without success and in fact, Trump was pursuing construction of a Trump Tower in Moscow in 2016.

Let’s not forget the facts that stare us in the face.  Trump senior publicly requested Russia’s help and hacking and distributing Clinton’s emails. This may have sounded like campaign rhetoric, but it served a blatantly clear purpose, to seek Russia’s campaign help by illegally hacking into private accounts and interfering in the American election, both of which are crimes.  Trump’s conspiring to gain Russia’s assistance is also a crime.

There is pervasive evidence that Trump has had long-term, ongoing financial dealings with the Russian mafia, has knowingly laundered money by selling properties at grossly inflated values, and has received continuing, unexplainable financial support from Deutsche Bank even after defaulting on massive loans from Deutche, which itself has been fined $600 million for Russian money laundering and is still under investigation by the DoJ.  Trump’s likely awareness and approval of communications (conspiracy) with WikiLeaks and the Russians was revealed, at the very least, by his speeches and tweets where he openly hinted of knowledge of those communications, often immediately after they occurred. (Trump simply cannot keep from bragging about what he knows.)

Add to all of this, the fact that Trump has engaged in repeated acts of obstruction of justice, starting with his firing of FBI Director Comey.  Trump confessed to Comey’s firing on national television, to kill or slow down the Russian investigation, and he then actually bragged about it to the Russians.  This pattern continued with his outrage that Attorney General Sessions recused himself from the investigation into Russian interference, and throughout the summer and fall as Trump aggressively pressured Senate Republicans to end their investigation into Russian interference in the election.  Trump constantly attacks factual news as fake, and attacks the legitimacy of the FBI, Mr. Mueller’s team, and every person who isn’t a Trump cheerleader.  Trump has repeatedly threatened to fire Mueller simply for doing his job

This level of corruption is unprecedented. We see Nixon as a benchmark for presidential malfeasance, but Trump’s efforts to obstruct are continuous, almost daily, and taken together with their scope and obvious motivation, far exceed Nixon’s criminality.

Of course, there are many other players with many hints of criminality in this Republican debacle, including Paul Manafort, Wilbur Ross, Erik Prince, JD Gordon, Roger Stone, Carter Page, and of course Russians by the boatload, at least 20 to date.

Trump’s impeachment would seem inevitable – if we had a congress that cared about things like treason, conspiracy, and widespread criminality in the executive branch.  But what about Pence?

Vice President Pence claims to know nothing about anything. He was always gone, always busy.  Really? How could Pence have been completely oblivious to the pervasive conspiracies circling around him, for months?  With a White House that leaks like a sieve, with Trump demanding Russian help in “finding” Clinton’s stolen emails and sharing his psychic premonitions of the next WikiLeaks flood, and with the media, even then, revealing information about Flynn’s financial relationships with Putin and President Erdogan of Turkey – Pence was utterly ooh-blivious? Is that how a VP works?  They keep him in a freezer and thaw him out if needed?

For a highly detailed and frightening look at the corruption that is Donald Trump and his associates, please see this timeline at billmoyers.com.  When it comes to corrupt American politicians, Trump has no equal. 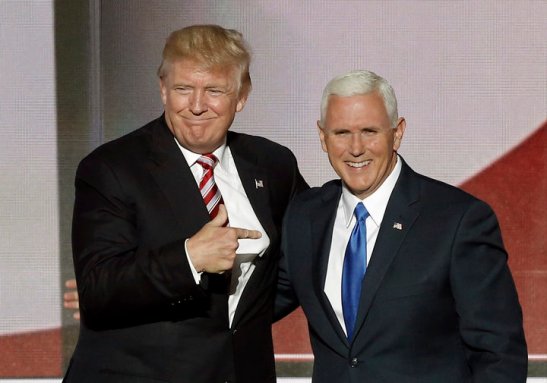