Now that we are sinking quickly into America’s Third Iraq War, we might want to take a look at what we can learn from the second one.

On September 11, 2001, a small group of terrorists, none of whom were from Iraq, flew jets into the World Trade Center. Since their leaders had been seen most recently in Afghanistan, the US invaded there, cornering their leader, Osama Bin Laden in the Tora Bora region of Afghanistan. Delta Force had Bin Laden located and surrounded and was prepared to mount an operation to go get him. For reasons that were never explained, the operation was disapproved from above, and the President decided instead to invade Iraq. None of the hijackers was from Iraq. Fifteen of the 19 terrorists were from Saudi Arabia. Two were from the United Arab Emirates, one was from Lebanon, and one was from Egypt. These countries are our “allies.”

At the time, Saddam Hussein ruled Iraq with an iron hand. He was not a nice guy. He ran a repressive country. But there was no Al Qaeda in Iraq, no sectarian fighting, no ISIS. For all his awful qualities he kept Iraq unified. Since Bush was facing criticism for his plans to invade Iraq, a pretext was manufactured: Saddam Hussein had weapons of mass destruction (the nerve gas we and the Germans gave him to use on Iran during their war which was finally used on his own Kurdish population). But this nerve gas was gone by the time the American war in Iraq started, so a phony trail was created beginning in Niger, Africa, from which Hussein was supposed to have acquired “yellow cake uranium.”

As a result of the war, sectarian fighting began between Sunni and Shia, hundreds of thousands of Iraqi civilians were killed, and four million Iraqis were driven into exile either in Jordon or internally in Iraq.

The war, with its sister war in Afghanistan, lasted over ten years and cost trillions of dollars, much of which was never accounted for, precipitating a financial crisis in the US from which it has not yet recovered, in spite of the bailouts.

An entire generation grew up during these wars, but as a teacher of young people, I can tell you that few can tell you anything about them. 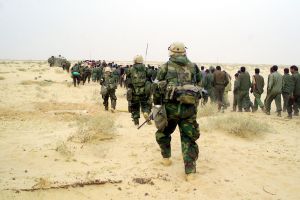