At the doctor’s office in Charlottesville, Virginia
to investigate the possible reasons
for my ten-month-old son’s large head,
the doctor measures my own
and informs me that my head size
is off the curve, off the charts,
and when I offer “freakish”
as a way of describing it
he doesn’t say yes but he doesn’t say no
and he looks at me calmly eye to eye,
mano a mano, and without a word
he answers my question,
which reaffirms my initial impression
that he is smart, informed,
and on top of his area of medical expertise—
a good doctor whose feet
are planted firmly on Virginia ground.
He explains that he has a special interest in big heads
because they run in his family—
his father, the elder neurosurgeon,
has a massive head, a trait which he himself,
unfortunately, did not inherit,
which he says is why as a doctor he must use
every bit of his smaller-sized brain,
and it’s why I feel better now,
after days and weeks and years of feeling tense,
knowing that my son’s head size is character,
maybe even personality, not disabling pathology,
and that in this one measurable way
I am ahead of nearly everyone else in the world.
And my wife, my daughter, my big-headed son
and I leave the hospital to eat lunch
at the downtown mall where my wife, my daughter
and I order sandwiches which we will insert
bite by bite into the biggest opening in our heads,
and then we’ll drive nearly two hours back north,
and walk into our big house
where I’ll step into the living room
and lie back on the sofa
so I can relieve myself, momentarily,
of the incredible burden of standing,
walking, running tall,
in an America that is shrinking
in so many ways,
and lay down my huge head. 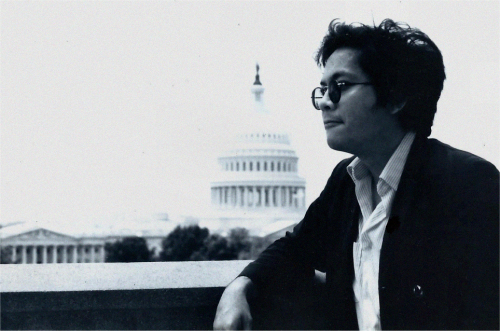 This photograph of the author was taken in 1982 from a balcony near the top of the Library of Congress.

This entry was posted on May 25, 2021 by Vox Populi in Health and Nutrition, Humor and Satire, Poetry and tagged Head over Heels, Jose padua.