All English poetry begins in a dream. The story goes, as told by the Venerable Bede, that an illiterate man, Caedmon, came to work for the Whitby Abbey. He tended the farm animals, and almost certainly worked for the Abbess Hilda. This would be about 658 in the Common Era, about 1360 years ago.

One evening, as the monks sang and played the harp, Caedmon slipped away. He knew no songs. Thus embarrassed, he spent the night sleeping with the animals. In his dream, “someone”, Bede says, approached Caedmon, and asked him to sing of the beginning of all things. At first, he refused, but finally relented and composed the “Hymn”. Upon awakening, he sang his poem to his foreman, who immediately took Caedmon to Abbess Hilda. After further inquiry, she concluded that his dream, and his poetry, came from God. Abbess Hilda, St. Hilda, ordered her scholars to instruct Caedmon in the monastic life and the sacred art of music. Caedmon would eventually compose hundreds of poems.

So the story goes. Aside from St. Bede’s testimony, all that survives of the work of Caedmon, himself regarded as a saint, is this one song, commonly known as “Caedmon’s Hymn”. The song survives in twenty-one medieval manuscripts, in Latin as well as in several dialects of Anglo-Saxon. The Feast Of St. Caedmon is celebrated on the 11thof February.

Below is the West Saxon version, followed by a modern English translation by Michael R. Burch.

Humbly let us honour heaven-kingdom’s Guardian,
the Measurer’s might and his mind-plans:
the goals of the Glory-Father. First he, the Eternal Lord,
eminently established earth’s fearful foundations.

Then he, the First Scop, hoisted heaven as a roof
for the sons of men: Holy Creator,
Maker of mankind. Then he, the Ever-Living Lord,
afterwards made men middle-earth: Master Almighty!

For those curious as to what the Anglo-Saxon sounds like, there is this recording by Prof. Robert D. Fulk of Indiana University.

For those curious as to what the Anglo-Saxon manuscript looks like, pictured below is possibly the oldest copy of “Caedmon’s Hymn”, which is held in the Cambridge University Library. The passage is taken from a manuscript, “The Moore Bede”, that dates from about 737: 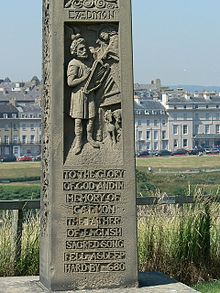 Memorial to Cædmon, St Mary’s Churchyard, Whitby. The inscription reads, “To the glory of God and in memory of Cædmon the father of English Sacred Song. Fell asleep hard by, 680.” [Wikipedia]