Jill Richardson: We need to talk about masculinity

When we discuss sexual assault, we often talk about women. What should women do to stay safe?

When I was in school, girls were even trained in women’s self-defense. I don’t know what the boys did during those time periods. Study hall?

Ask any woman what she does to prevent sexual assault and she’ll have an answer. She uses the buddy system when walking at night, or she carries pepper spray, or she doesn’t leave her drink unattended when she’s out, and so on.

We look out for one another. In college I had a friend with an alcohol problem. We’d babysit her or take her home to keep her safe if she drank too much, to keep her from getting assaulted.

Ask a man what he does to keep himself from getting assaulted. At most, you’ll get a “don’t drop the soap” joke.

Men express their gender identities in a variety of ways. Some believe that “being a man” requires honesty, courage, hard work, and competence. Others express masculinity through physical prowess, toughness, and daring.

And some think it means sexual prowess with women.

When men or boys express emotions other than anger, show vulnerability, or do anything that can be remotely construed as “feminine,” they’re linguistically kicked out of manhood, told to “man up” or “grow a pair.”

I saw my father socializing my brother into his future role as a man from a very young age. If my brother cried or expressed any weakness, my father told him to “be a tough hombre.” My brother suffered from severe anxiety and probably PTSD. He didn’t need to be told to man up. He needed hugs, empathy, love, and therapy.

For straight men who emphasize the performance of sexual prowess, sex with women is necessary to achieving masculinity — and women saying no puts a roadblock in their path to being a man. For these men, it’s inconvenient that they don’t have carte blanche access to our bodies.

It doesn’t help that vulnerability is “unmanly,” or that we socialize men to repress their emotions instead of feeling them, because those are necessary ingredients in a healthy intimate relationship.

Obviously, this doesn’t characterize all men. However, the pressure on men to achieve masculinity through sexual prowess, devoid of any emotional vulnerability or empathy, serves to create a toxic culture in which some men believe they have a right to women’s bodies.

So when women deny them access to their bodies, some men take it by force.

In fact, a Five Thirty Eight review of recent studies suggested that this kind of toxic masculinity, more so than alcohol, is what leads to sexual assault.

Maybe if we raised men to feel their full range of emotions, to feel confident in their manhood without violating women, and to respect the boundaries of others, we wouldn’t have to teach women to use the buddy system and watch their drinks.

Jill Richardson is the author of Recipe for America: Why Our Food System Is Broken and What We Can Do to Fix It.

First published in OtherWords. This work is licensed under a Creative Commons Attribution-Share Alike 3.0 License. 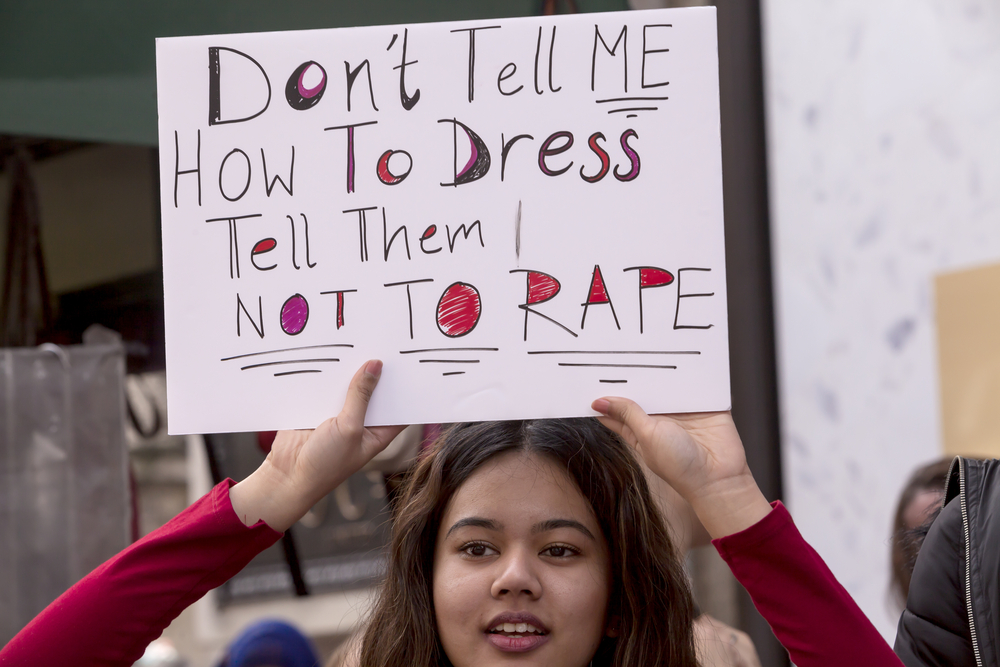 “Don’t tell me how to dress. Tell them not to rape.” [Shutterstock]

This entry was posted on October 5, 2018 by Vox Populi in Health and Nutrition, Opinion Leaders, Social Justice and tagged A Rape Victim Addresses Her Attacker, A Woman Speaks to the Man Who Raped Her, Being Raped for a Living, Jill Richardson, rape of boys, Rape on the Night Shift, The Industrialization of Rape at Auschwitz, The Rape of the Mind: The Psychology of Thought Control, toxic masculinity, We need to talk about masculinity.