Marc Jampole: The long-term effects of separating children from their parents

The real tragedy of separating children from their parents will come years from now when the kids suffer from Post-Traumatic Stress Disorder.

These past few days, I’ve been feeling a special empathy with the children whom the United States government ripped from their families at the border and sent to special facilities. My empathy comes from knowing in the most intimate way possible some of the emotional challenges that these children will face throughout their lives.

You see, I’ve been having one of my occasional bouts of Post-Traumatic Stress Disorder (PTSD) caused by traumatic events I suffered during my childhood. My PTSD manifests itself as sudden feelings of unexplained anxiety or full-blown panic attacks in which I lose all control of my ability to focus, have hot and cold flashes at the same time, feel as if I’m going to burst out of my skin, and am unable to focus on anything. I’ll spend hours alternatively pacing and trying to remain still long enough to get some work done or sleep. I sometimes also experience sudden feelings of guilt, shame and anger, all typical of survivors of war, natural disasters, epidemics, famine, family suicide or childhood trauma.

My occasional symptoms are not the only manifestations of PTSD that inflict sufferers. Far from it. Here are some worse ones: Substance abuse, flashbacks, bad dreams, extreme depression, sleeplessness, loss of memory, sudden bouts of aggression, an inability to form relationships and a lack of trust in others, even loved ones. Everyone can experience these problems from time to time, but when they last more than a month and someone has been involved in a shooting war, raped, escaped a flood or lost their home, it’s a safe bet that they have PTSD.

Experts like to estimate the percentage of people who have had a specific trauma who end up suffering from PTSD, e.g. only (only!) 30% of Vietnam War veterans will display PSTD symptoms during their lives. Overall, the medical community believes that about 10% of the population will have PSTD, with the occurrence more common in women. I think all the official percentages of those experiencing traumatic conditions who end up with PSTD are low. Lots of people just suffer in silence, or they present symptoms that are poorly understood, e.g., the horde of men who came home from World War II and turned into distant, unemotional fathers and focused their waking hours solely on their careers and/or hid their fears and anxieties inside a bottle. As significant as underreporting is under-diagnosis: society has a vested interest in minimizing the psychic damage to those who fight wars; women who suffer sexual abuse; and the poor, usually minorities, who face food insecurity or have been moved out of their neighborhoods by urban planning or gentrification.

Whatever the unalloyed numbers are, only a fool or an ideologue would deny that a large percentage of the children torn from their families at border crossings will be scarred for life, unhappy, unable to achieve their potential, prone to depression or substance abuse, perhaps always feeling like a lonely outsider. These are human tragedies that didn’t have to occur.

But wait, the cynic among us, will say. These children were refugees from natural disasters or violence, so they already have undergone much trauma. These self-serving apologists seem to forget the special bond between children and their parents. Before the teen years, children’s lives revolve around their parents, who protect them, shelter them, feed them, love them, teach them basic values and provide them with models of human behavior. There’s a lot that parents do to protect children from trauma. They can do without so their children get what they need. They can turn a flight from terror into an adventure. They can articulate a rosy vision of the wonderful future in their new home. They can hug them and tell them they love them and that everything is going to turn out fine.

War, famine, terror, flooding, food insecurity, a sudden plunge into poverty—all children or young adults will handle any trauma better when part of a loving (or even not so loving) family when they face these evils.

But to do it without a parent? To be alone in a large cage inside a windowless building, being herded around by ominous-looking strangers, not knowing if and when you’ll ever see your family—the center of your life—again, not knowing where they are? Why were you torn away from them? When will you see them again? Why won’t they come get you? Don’t they love you anymore?

No matter how horrible a child’s life has been, it gets worse when it is taken from its family. Always.

The Trump Administration has tried an odious argument in favor of parent-child separations, stating that in many cases, the adults aren’t really the parents, but drug dealers who bought, borrowed or stole the children to make it easier to get through border control. Oh, sure there are. Just as there really was at least one woman on welfare who drove a late-model, fully-loaded Cadillac in the late 1970s. And I’m sure that Willie Horton really did commit a violent crime while on parole. But like Reagan’s welfare queen and Bush I’s paroled violent offender, the child who is part of an elaborate ploy to gain illegal admittance to the United States is a statistical anomaly. Studies show that there has never been very much welfare fraud and that most cons on parole say clean. And I’m quite certain that virtually all children who arrive at the border with adults are coming with their parents or another close family member, and not a drug dealer.

Reagan, Bush I and Trump all argued from anecdote and not from fact. The fact is that the United States started doing the “extreme vetting” Trump called for during the 2016 presidential campaign long before Trump demanded that we build a wall along the Mexican border. The proof of it is in the fact that immigrants—legal and otherwise—commit far fewer crimes per capita than native-born Americans. Under Clinton, Bush II and Obama, we developed a state apparatus which is quite good at keeping out bad actors. Breaking up families has not helped fight drug smuggling. It has done nothing but increase misery and assure that perhaps thousands of children will have emotional problems later in life. There was never any reason to automatically separate children from their parents at border control points.

Except of course, to assuage the base urge to be cruel to the downtrodden.

In all cases, the underlying reason for the cruelty may have been humanity’s essential bloodthirstiness, but the excuse was that these were lesser people or not people at all—animals as Trump sometimes calls non-European immigrants.

But human beings are not animals. Those who think that some people are animals or no better than animals or want to treat them as animals are despicable human beings. The real deplorables, to take a phrase from the winner of the 2016 presidential popular vote.

American policy at home and abroad should not be to create more victims of PSTD, but to reduce the circumstances that lead to this psychic ailment. 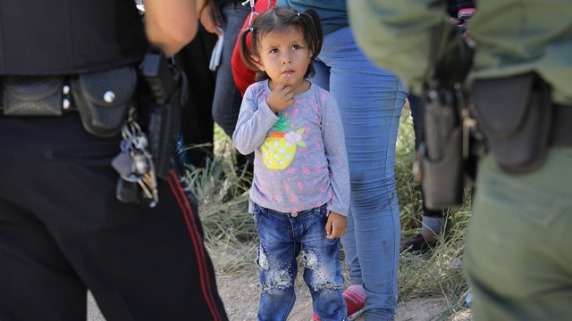 A Mission Police Dept. officer and a U.S. Border Patrol agent watch over a group of Central American asylum seekers before taking them into custody [Photo: KDFW]

One comment on “Marc Jampole: The long-term effects of separating children from their parents”