That weekend started off with another encounter with the woman who always tailgates me when I’m trying to stay somewhat close to the school zone speed limit. I’d just dropped off my son Julien when she turned onto the road behind me from the main parking lot. Looking into the rearview mirror, I could see her cold blue eyes staring straight ahead in furious contempt. She followed a few feet behind me for half a minute. Then, when there was a break in the oncoming traffic, she stepped on the gas and zoomed around me. She got all of three, maybe four car lengths ahead of me before she had to slow down again because she was now behind another car that was more or less obeying the speed limit. Still, she had probably shaved an entire half second off her commute, which meant that by going around me she was that much closer to completing her role in making America great again.

Later that day, when we were all home again, I noticed that my daughter Maggie had been carrying around my friend Liz Hand’s novel, Waking the Moon. It’s about the supernatural happenings involving a group of friends who met at college and includes a character based on me. Although the character is much cooler than I was, it still felt odd to have Maggie seeing me this way. This isn’t to say that the real me she sees everyday isn’t odd enough already, it’s just that there’s something about books and real literature that makes you look at the world that much more closely, and I imagined that Maggie, after reading Waking the Moon, was looking at me that much more critically. I just hoped that when she was done with it she still considered the non-book version of me odd and weird enough to take seriously.

After dinner, Heather and Maggie talked again about a paper Maggie did for school on refugees. That’s when Julien asked me to show him my collection of vinyl records in our hall library. One by one, I pulled out the albums of recordings he’d only seen in CD form: Miles Davis’s Bitches Brew, The Art Ensemble of Chicago’s Les Stances a Sophie, Ornette Coleman’s Friends and Neighbors. The full size LPs of all of these impressed him, but what really made his eyes light up was when I pulled out Rahsaan Roland Kirk’s Blacknuss LP. At the time, Rahsaan Roland Kirk was what he asked to hear more than anything else. “Wow,” he said, and he reached out to hold the album himself. When he’s a little older, I thought, I can show him how to use the turntable— just like a couple of years ago when I showed Maggie how to use it to play the Velvet Underground albums she found in my record collection.

That night, we were in Richmond, Virginia, taking another break from the small town life. I was always astounded, whenever we visited a real city, how much more comfortable it was for me. Even in a southern city like Richmond there was so much more of a mix than in our small town. And though there were still people there in Richmond like the guy with the shaved head and yellow Tea Party sticker on his leather jacket—he made a point of staring at me as he walked past us at the pizza joint where we had dinner—most of the time I felt like I didn’t need to explain anything to anyone there. I was an American there in Richmond, and I could be as odd as I needed to be, at least some of the time.

Twenty-three years ago that night, I was in Georgetown Hospital in DC, spending the night in the reclining chair next to my Mom’s hospital bed. In the morning she had another heart attack, and then, that afternoon, she died. She was born in the Philippines in 1925, and although she was always Pinay, or a Filipina, she was also, by the time she died, an American. If she were alive today, and wanted to make one last visit to the Philippines then come back to America, she’d do it. Yeah, one way or as many ways as you can dream of, she’d do it. Because she had two homes—the country where she was born, and the country she worked hard to make her home.

I remember the day when my Mom got her green card. She was happy, she was relieved—I could hear the actual sigh she let loose when she found out. It meant our lives here were more secure. It didn’t mean we were what everyone here would call Americans, but it meant we could keep on trying. It meant that we had a chance.

This poem was written in celebration of my mother and the color green, and all the powers she and it had, both together and separately.

Once she made
her way
to the States
in the early 50s,
my mother
never made it
back to the
country where she
was born,
which in the eyes
of some
didn’t make
her an American,
but which to us,
her children,
made her
as American
as she needed
to be. 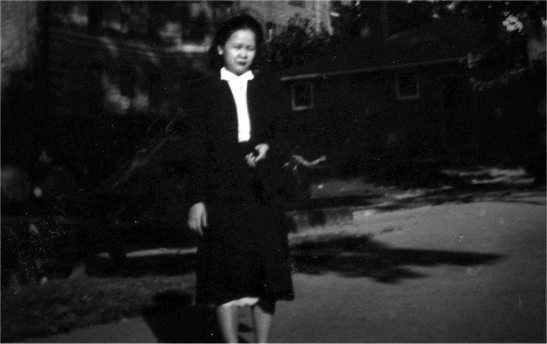