Michael Simms: An Appreciation of the Poetry of Robert Gibb

Robert Gibb is a poet’s poet. By that phrase I mean that he’s widely admired among poets across the country, but virtually unknown to the public. He’s published a dozen full-length collections and won many awards, including the National Poetry Series, two National Endowment for the Arts Fellowships, a Pushcart Prize, and a few Pennsylvania Council on the Arts Fellowships. His collection After won the 2016 Marsh Hawk Press Poetry Prize chosen by the acclaimed memoirist and poet Mark Doty, and his latest book Among Ruins won the Ernest Sandeen Award from the University of Notre Dame Press. Yet, despite being regarded by many as one of the most important poets in the country, few people outside the poetry field, even in Pittsburgh, know that he exists.

You might say that in the national poetry community Gibb is famous for being unknown. The paradox can be explained perhaps by his unfashionable shyness, his passion for privacy, and his utter lack of narcissism. Gibb is an anomaly in contemporary America, a person who dislikes the limelight and despises self-promotion. He rarely gives readings. He doesn’t attend conferences. Flattery is a foreign tongue to him, and he’s completely at a loss when schmoozing is called for. If you want to talk to him, you’ll have to go to his neighborhood bar where he nurses a beer every Friday evening while talking to his neighbors who have no idea that he’s a major American poet because he’s never mentioned it. And his art is not the only subject he doesn’t discuss with his neighbors. In the poem “On Not Telling Anyone At The Bar,” Gibb explains why he didn’t tell them about the death of his wife:

Because I could not find a place for her death there

In the auspices of gossip and small talk and jokes…

Gibb has lived most of his life in Homestead, Pennsylvania, six miles south of downtown Pittsburgh, and spends his time tending his vegetable garden, sketching landscapes in his notebook, and writing some of the most elegantly understated works of literature that have ever been created by an American. What August Wilson did for the Hill District and John Edgar Wideman did for Homewood, Robert Gibb has done for Homestead. The former mill town is not only his home; it is his subject and his inspiration. Born to a family of steelworkers, he is a champion of the Monongahela Valley — its history, its geography, its mix of ethnicities. The Homestead Trilogy, a nearly 100-poem cycle probing the fading industrial culture of his hometown, is widely regarded (at least among people who care about such things) as an American masterpiece.

In the trilogy, Gibb moves beyond a description of place and creates a deeply imagined, personal saga of a multigenerational, working-class family, a true novel in verse. The Gibb family history, often troubled, is offered up as testament to the human costs of industrialization. The poet is a master as well of the more public Pittsburgh history. He writes of Kennywood, Frick Park, Clayton, and the Carnegie Natural History Museum. “Khrushchev Visits Mesta Machine, 1959: A Variation on the Double-Sonnet” marks an iconic Cold War moment, and it is, as one critic describes it, “dead funny.” In an interview, the poet said he attempted to use the mill town “as a kind of epicenter — social, historical, autobiographical” – in other words, a world in which to hold the world. As the late Peter Oresick wrote in The Pittsburgh Post-Gazette about World Over Water, the final book in the trilogy: “There is something a little crazy in this approach to a book of poems. Gibb’s insistence on squeezing so much meaning out of Homestead is reminiscent of August Wilson’s limited but intense spotlight on the Hill District in his Pittsburgh cycle of plays. Yet, somehow they both pull it off.”

Often, Gibb’s poems describe photographs of Homestead in its bustling heyday. For example, these lines are from “Dream Street” which celebrates the work of W. Eugene Smith:

Deepening the contrasts of light and shade:

The platinum of the train tracks,

Being freighted down the river…

Gibb’s poems are so natural in their tone that they might seem like someone, anyone, just talking; that is, if anyone but Gibb could have a genius for lyric precision, a painter’s eye for detail, an impeccable ear for the music of his native dialect, and an unbearable grief born from the awareness of losing everything that matters to him a little at a time. Below, for example, is “Kites”, a short poem which captures the feelings of a boy when he sees furled kites in the neighborhood five-and-dime at the beginning of Spring. You can sense in these lines the boy’s imagination soaring with his kite above the river valley. The entire experience is captured in these lines: the thrill of anticipation, the challenge of the construction, the excitement of flight, the aftermath of ruin.  In this one short narrative, the entire arc of life is represented:

About their slats, the air

In an undertow above us

Of kite string, tugging against

Into place against the crosspiece,

Tautly as a sheet, then lift

Up to where it hauled me

Trolling into the winds—

Of light. Why ruin it

By recalling the aftermaths?

Kites gone down in tatters,

From the tops of the trees.

How does Gibb create this economy of expression? Simply put, through the music of his native tongue.  For example, notice the first two words — “Come March” — a colloquialism that is typical of the way we speak in this region.  He could have said “When March arrives” or “In early Spring”, but “Come March” is economical and accurate — so much expressive work is done by those two words.

Now look at the whole first line: “Come March we’d find them.” Notice the nasal consonance of the m’s complimented with the nd of find, how this musical sequence creates a gentle hum in the air. And notice the imagery of the poem: “furled tighter than umbrellas”, “flashing among fields/of light”. And note the nautical metaphors: “undertow,” “tensed keel of balsa,” “Tautly as a sheet.”

Notice also the meter of the poem:  a loose trochaic trimeter (three stresses per line, alternating stressed and unstressed syllables, beginning with a stressed syllable). This meter, most famously employed in Shelley’s “To a Skylark” but rarely used in contemporary American poetry, is an inspired choice for capturing the emphatic rhythms of the Mon Valley dialect. Gibb may have the most impeccable ear for the music of the American language of any poet since Robert Frost — who also liked to revive rare metrical forms and shape them to the rhythms of his regional dialect.

Certainly, it’s no exaggeration to say that Gibb paints the Mon Valley with the same precision that Frost did his native region. But unlike Frost’s New England which even now remains largely unspoiled, Gibb’s Mon Valley has disappeared beneath the asphalt parking lots of malls. The closing of the steel mills destroyed the town of Homestead, and Gibb’s vision is drawn from memory and imagination, grief and nostalgia. His on-going life’s work has been to create an elegy for a lost world. 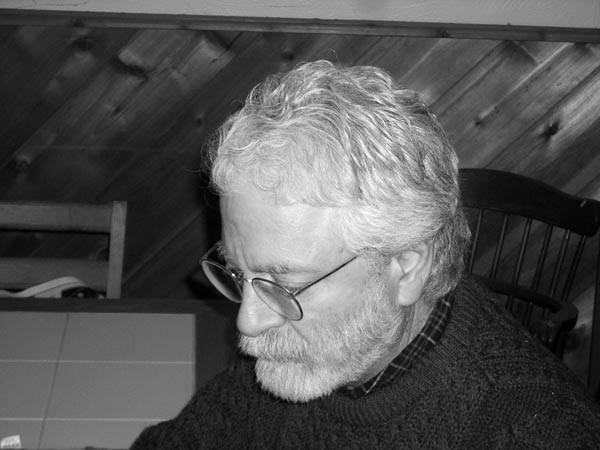 5 comments on “Michael Simms: An Appreciation of the Poetry of Robert Gibb”

This entry was posted on February 24, 2018 by Vox Populi in Fiction, Literary Criticism and Reviews, Note from the Editor, Personal Essays, Poetry and tagged An Appreciation of the Poetry of Robert Gibb, Homestead PA, Michael Simms, Monongahela Valley, Peter Oresick, post-industrial America, The Homestead Trilogy, World Over Water.