Through sustained networking and resistance, which secured redistribution and recognition, many Latin Americans have come to expect more of their governments.

The good news is that we know how to tackle it: tax global wealth, provide a universal basic income, broaden access to quality education and promote decent work.

The bad news is that many governments are not interested – and neither are their electorates. In order to stem rising inequality we need to understand what drives resistance, politicisation and government responsiveness.

Latin America offers some useful lessons. Here, income inequality has actually fallen, as shown by a decline in the average Gini index by 13%, from 2000-2012. This bucks the global trend, of growing income inequality. [Click graph to enlarge] 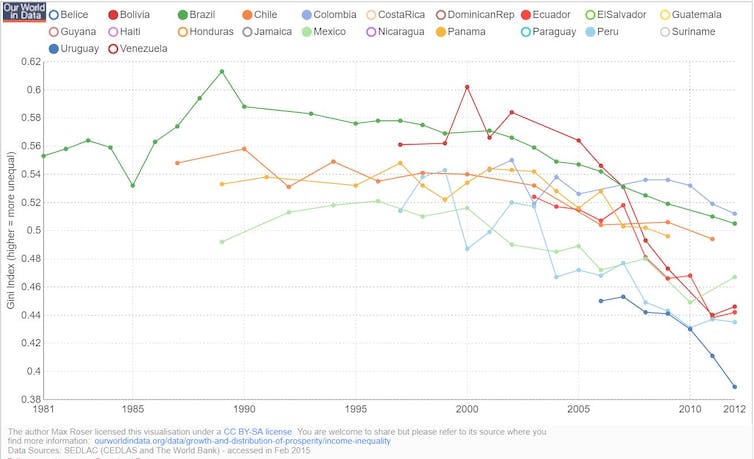 Income inequality has fallen across Latin America. Our World in Data, CC BY-SA

This was complemented by the redistribution of wealth. Rising public spending on healthcare, education and social protection improved both coverage and quality for all citizens.

We now need to understand why these policies were adopted. I think there are three possible explanations: increased government revenue (due to the commodities boom); democratisation (incentivising political parties to court poor voters); and social movements that make inequality a political issue.

Arguably, public spending to benefit all levels of society was enabled by the 2000s commodities boom. This was accompanied by improved terms of trade, economic growth, increased tax/GDP ratio, debt cancellation, reduced dependence on the US and international financial institutions, as well as more foreign aid to achieve the Millennium Development Goals.

But why did governments choose to redistribute, rather than enrich the elite? Latin American economies had also grown in the 1990s, but inequality continued to soar (just like the US today). But in the 2000s, we saw rising support for leftist parties, promising redistribution. [Click graph to enlarge]

Democratisation might help explain falling inequality. The desire to secure votes and retain power may have incentivised political parties to court poor voters, and address their concerns.

However, there is no robust evidence that democracy reduces inequality. Nor does democracy appear to increase social spending in Latin America. Further, the poorest do not necessarily vote for left-wing parties.

That said, when we look at a 20-year period, democratisation is associated with increased social spending and reduced income inequality. Democratisation appears to enable important other factors, such as leftist organising.

One long-term process has been social mobilisation, which has politicised inequality.

Indigenous parties, representing some of the poorest groups in Latin America, have performed better in countries with stronger, more unified indigenous social movements. 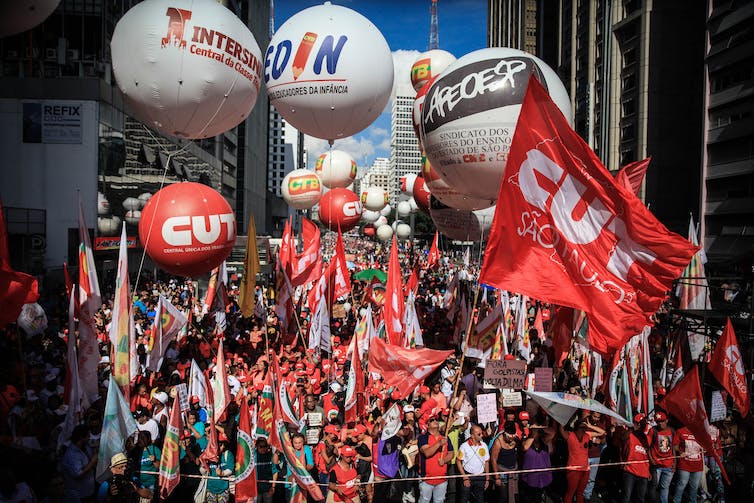 Brazilian social movements and unions out in force. EPA/Fernando Bizerra

Though social mobilisation was triggered by economic liberalisation, it then catalysed a shift in ideas. By sharing experiences at rallies and roadblocks, recognising common grievances, puncturing neoliberal orthodoxy, celebrating hitherto marginalised identities and seeing widespread resistance to the status quo, many Latin Americans gained confidence in the possibility of social change.

Key here are “norm perceptions”: our beliefs about what others think and do. If we never see resistance, we may assume others accept the status quo. So we become despondent and reluctant to mobilise. Such norm perceptions can reinforce inequality. But this changed in Latin America, through sustained activism.

Norm perceptions also changed when people saw progress in neighbouring countries. Electoral victories in Colombia, Ecuador and Bolivia emboldened indigenous organisations in other countries to form political parties. This regional effect may partly explain why inequality fell in Latin America but not elsewhere.

Such exposure shifts norm perceptions and enables positive feedback loops. By seeing their peers pushing for change, people may become more confident in the possibility of collective resistance and join forces. This kind of shared learning is clearly much harder in more remote areas.

Through sustained networking and resistance, which secured redistribution and recognition, many Latin Americans have come to expect more of their governments.

But material change has not kept pace with demand. Latin American governments have failed to carefully manage commodities booms and rein in corruption. When prices tumbled, so did these governments. But inequality remains politicised.

To amplify resistance against inequality, we need to shift norm perceptions. My research on Latin America reveals the importance of seeing widespread resistance, realising the power of collective organising, securing government response – and recognising that inequality can be radically reduced.

First published in The Conversation. This work is licensed under a Creative Commons Attribution 4.0 International License.
.

Alice Evans is a Lecturer in International Development at King’s College London.