The November 7 results suggest that the midterm election will be about change, throwing Republican white guys out of house. Trump has given the resistance enough ammunition that it doesn’t need one focussed message.

On election day in 2016, Donald Trump surprised most of us by defeating Hillary Clinton (although he garnered only 46.1 percent of the popular vote). One year later, what have we learned?

1. Trump is not a joke. There were some of us who dismissed Trump, gave him no chance to win. A terrible mistake.

After the election, some observers hoped that Donald would “grow into” the presidency, begin acting presidential. Sadly, Trump shows no sign of doing this.  He’s continued the same erratic, self-centered behavior.

As a result, Trump is “a clear and present danger” to the U.S.  A recent CNN poll indicated that 71 percent of respondents believe that “politics has reached a dangerous low point.”

2. Trump’s base has stuck with him. Just before the election, the Huffington Post “Poll of Polls” showed Clinton with a five point lead—47.3 percent to 42 percent.  Last-minute voters broke mostly for Trump. A recent Center for American Progress study suggests that these were primarily white non-college-educated voters.

Many of his adherent refuse to believe the negative reports on Trump’s behavior; they dismiss it as “fake news.” Others are focussed on a particular issue and, as long as Trump supports that issue, they stand with him.  Based upon the results of the recent Pew Research poll of political typology, Trump’s supporters are those who share one or more of these opinions: Washington politics are fatally flawed and need to be “blown up;” Taxes are too high;  Immigrants burden the U.S.; and Washington has taken away “religious liberty.”

3. Trump’s base is driven by a level of desperation that most Democrats don’t understand. Running up to the presidential election there was persistent polling indicating Americans were dissatisfied with the direction the country has been taking and felt the country wasn’t working for them.

Arlie Hochschild’s book, Stranger in Their Own Land, describes the viewpoint of Tea Party/Trump voters. They feel that they have been unfairly denied their shot at the American dream.  These voters don’t trust government to do the right thing. They turned to Trump because they saw him as someone outside the government who could shake things up; “Make America Great Again.”

4. On election day, there was an enthusiasm gap. It was a very close election and there are many reasons why Hillary Clinton lost: bad campaign decisions; the Comey announcement; Russian subterfuge; Republican efforts to disenfranchise voters; disgruntled Bernie voters; among others. Nonetheless, the very few voters I know who voted for Trump tell a similar story, “I didn’t like Trump but I couldn’t stand Clinton.”

5. Obama was an effective President but a crummy leader of the Democratic Party. On the November 3 PBS “News Hour,” commenting on recent revelations about the relationship between the Democratic National Committee and the Hillary Clinton campaign, Mark Shields observed, “It’s proof… of how little Barack Obama cared about the Democratic Party or about politics. He was great at getting elected…. He was leaving the party $24 million in debt, therefore, vulnerable to Hillary Clinton’s coterie of big givers.”

One of the many reasons that Clinton lost was that the national Democratic Party was weak. The blame for this has to laid at the feet of the leader of Democratic Party, Barack Obama.

6. Bernie Sanders probably has an important role going forward but it’s not clear what it is. There’s a lot of mainstream media attention given to divisions in the Democratic Party, primarily Bernie supporters versus Hillary supporters. I don’t see this here (Berkeley). In 2018, there’s so much work to do that Bernie, and his supporters, will be an asset to the resistance.

7. Russia impacted the election but it probably wasn’t the determining factor. There’s little doubt that Russia intervened in the election: by hacking the DNC emails, by running malicious social media ads, and other activities. Nonetheless, I believe that, in 2016, if Obama had been running against Trump, Barack would have won.

8. Trump has been a disaster for the environment. Trump is so terrible across the board that it’s difficult to focus on particulars but here are two. Trump, by his statements and his political appointments, has set out to reverse everything the Obama Administration did to protect the environment. As one consequence, the U.S. stands alone in opposition to the Paris Climate Agreement.

9. Trump has encouraged bigotry. Before the election, we believed that Trump was prejudiced; everything he’s done as president has convinced me that he’s worse than we imagined—a white supremacist. Across the nation this has had a devastating ripple effect; Trump has encouraged hate.

10. Democrats still don’t have a message. Fortunately, in 2018, that won’t matter. The November 7 results suggest that the midterm election will be about change, throwing Republican white guys out of house. Trump has given the resistance enough ammunition that it doesn’t need one focussed message.

First published in Common Dreams. This work is licensed under a Creative Commons Attribution-Share Alike 3.0 License.
.

Bob Burnett is a Berkeley Quaker, activist, and writer.  In another life he was a Silicon Valley executive — co-founder of Cisco Systems. 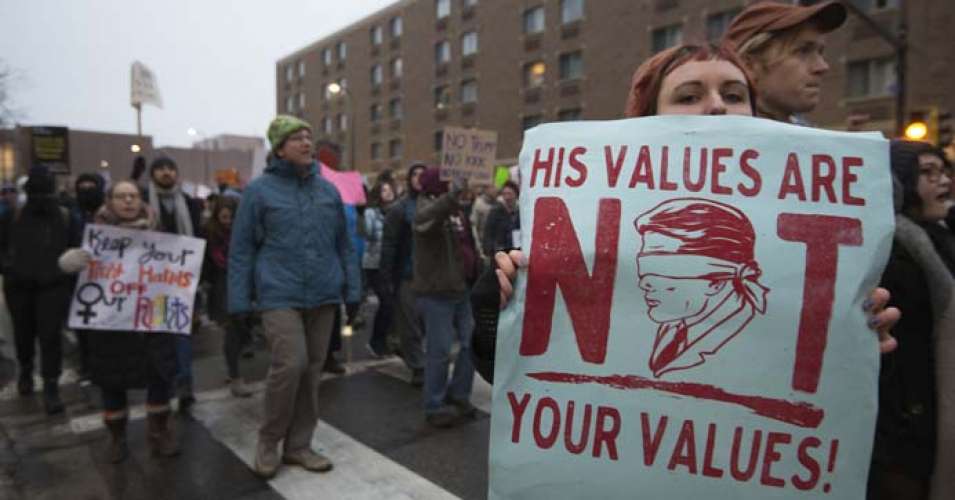 About 3,000 people marched through Minneapolis to protest the inauguration of President Donald Trump. They gathered in south Minneapolis and then marched downtown to City Hall, offering critiques of Trump’s policies on women, immigrants, Muslims, LGBTQ people, workers, and the environment. (Photo: Fibonacci Blue/Flickr/cc)

One comment on “Bob Burnett: One Year Later — 10 Lessons Learned From the Trump Presidency”