Ed. Note: Emily Wilson is widely believed to be the first woman to translate Homer’s The Odyssey into English. Here are the opening stanzas of the new book which poets and scholars are praising.

Tell me about a complicated man.
Muse, tell me how he wandered and was lost
when he had wrecked the holy town of Troy,
and where he went, and who he met, the pain
he suffered in the storms at sea, and how
he worked to save his life and bring his men
back home. He failed to keep them safe; poor fools,
they ate the Sun God’s cattle, and the god
kept them from home. Now goddess, child of Zeus,
tell the old story for our modern times.
Find the beginning.

All the other Greeks
who had survived the brutal sack of Troy
sailed safely home to their own wives—except
this man alone. Calypso, a great goddess,
had trapped him in her cave; she wanted him
to be her husband. When the year rolled round
in which the gods decreed he should go home
to Ithaca, his troubles still went on.
The man was friendless. All the gods took pity,
except Poseidon’s anger never ended
until Odysseus was back at home.
But now the distant Ethiopians,
who live between the sunset and the dawn,
were worshipping the Sea God with a feast,
a hundred cattle and a hundred rams.
There sat the god, delighting in his banquet.
The other gods were gathered on Olympus,
in Father Zeus’s palace. He was thinking
of fine, well-born Aegisthus, who was killed
by Agamemnon’s famous son, Orestes.
He told the deathless gods,

“This is absurd,
that mortals blame the gods! They say we cause
their suffering, but they themselves increase it
by folly. So Aegisthus overstepped:
he took the legal wife of Agamemnon,
then killed the husband when he came back home,
although he knew that it would doom them all.
We gods had warned Aegisthus; we sent down
perceptive Hermes, who flashed into sight
and told him not to murder Agamemnon
or court his wife: Orestes would grow up
and come back to his home to take revenge.
Aegisthus would not hear that good advice.
But now his death has paid all debts.”

Athena
looked at him steadily and answered, “Father,
he did deserve to die. Bring death to all
who act like him! But I am agonizing
about Odysseus and his bad luck.
For too long he has suffered, with no friends,
sea all around him, sea on every side,
out on an island where a goddess lives,
daughter of fearful Atlas, who holds up
the pillars of the sea and knows its depths—
those pillars keep the heaven and earth apart.
His daughter holds that poor unhappy man
and tries beguiling him with gentle words
to cease all thoughts of Ithaca; but he
longs to see even just the smoke that rises
from his own homeland, and he wants to die.
You do not even care, Olympian!

Remember how he sacrificed to you
on the broad plain of Troy beside his ships?
So why do you dismiss Odysseus?”

“Daughter!” the Cloud God said, “You must be joking,
since how could I forget Odysseus?
He is more sensible than other humans,
and makes more sacrifices to the gods.
But Lord Poseidon rages, unrelenting,
because Odysseus destroyed the eye
of godlike Polyphemus, his own son,
the strongest of the Cyclopes—whose mother,
Thoösa, is a sea nymph, child of Phorcys,
the sea king; and she lay beside Poseidon
inside a hollow cave. So now Poseidon
prevents Odysseus from reaching home,
but does not kill him. Come then, we must plan:
How can he get back home? Poseidon must
give up his anger, since he cannot fight
alone against the will of all the gods.”

Athena’s eyes lit up and she replied,
“Great Father, if the blessed gods at last
will let Odysseus return back home,
then hurry, we must send our messenger,
Hermes, the giant-slayer. He must swoop
down to Ogygia right away and tell
the beautiful Calypso we have formed
a firm decision that Odysseus
has waited long enough. He must go home.
And I will go to Ithaca to rouse
the courage of his son and make him call
a meeting and speak out against the suitors
who kill his flocks of sheep and longhorn cattle
unstoppably. Then I will send him off
to Pylos and to Sparta, to seek news
about his father’s journey home and gain
a noble reputation for himself.”

With that, she tied her sandals on her feet,
the marvelous golden sandals that she wears
to travel sea and land, as fast as wind.
She took the heavy bronze-tipped spear she uses
to tame the ranks of warriors with whom
she is enraged. Then from the mountain down
she sped to Ithaca, and stopped outside
Odysseus’s court, bronze spear in hand.
She looked like Mentes now, the Taphian leader,
a guest-friend. There she found the lordly suitors
sitting on hides—they killed the cows themselves—
and playing checkers. Quick, attentive house slaves
were waiting on them. Some were mixing wine
with water in the bowls, and others brought
the tables out and wiped them off with sponges,
and others carved up heaping plates of meat.
Telemachus was sitting with them, feeling
dejected. In his mind, he saw his father
coming from somewhere, scattering the suitors,
and gaining back his honor, and control
of all his property. With this in mind,
he was the first to see Athena there.
He disapproved of leaving strangers stranded,
so he went straight to meet her at the gate,
and shook her hand, and took her spear of bronze,
and let his words fly out to her.

“Good evening,
stranger, and welcome. Be our guest, come share
our dinner, and then tell us what you need.”

The Odyssey by Homer. Translated from the Greek by Emily Wilson. Translation copyright 2017 Emily Wilson. Published by W.W. Norton. Republished in Vox Populi for educational purposes only.

Emily Wilson is a professor of classical studies at the University of Pennsylvania. She lives in Philadelphia.
. 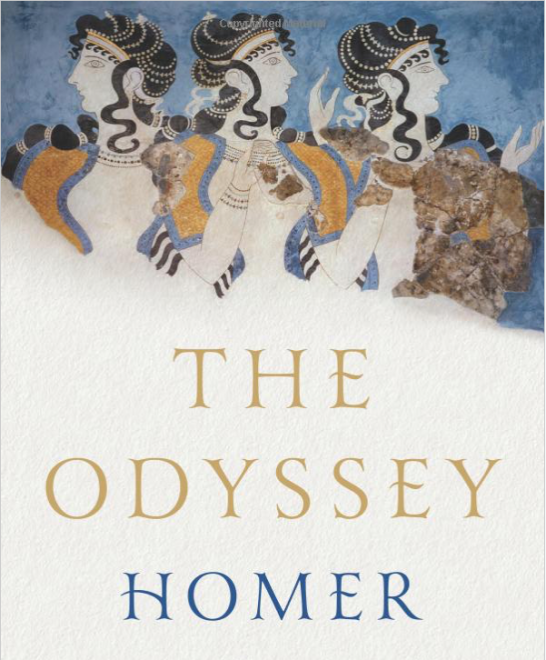 One comment on “Emily Wilson: The Odyssey (A New Translation)”