Republican leaders are reeling from their primary loss in Alabama and the demise of their health-care bill, but they have only themselves — and their big donors — to blame.

There are lots of explanations for why Republicans have backed themselves into a corner both legislatively and politically, unable to either enact an agenda or to contain a populist uprising that now poses as great a threat to GOP incumbents as it does to Democrats. The most obvious issue is that the GOP’s intransigence, anti-government attacks and culture wars have unleashed a monster that Republicans can no longer control. But another, less apparent, problem that helps explain the GOP’s vicious cycle of paralysis and unpopularity has to do with big money.

As the champions of campaign-finance deregulation and unrestricted corporate spending, Republicans on Capitol Hill are now more in tune with their billionaire conservative donors than with the average GOP voters who rallied behind Trump. This shows up in both the shelved GOP health-care bill and in the pending Republican tax overhaul, which both cater to ultra-wealthy donors while ignoring that most Republicans actually support Medicaid and do not favor cutting taxes for the rich.

Moore’s upset doubly stung Republicans because Trump had backed Strange, and because it coincided with the demise of GOP senators’ latest bill to repeal Obama’s signature health-care law. Both the primary and the GOP health-care failure are emboldening ultra-conservatives bent on challenging Republican incumbents in Senate primaries. This could make it easier for Democrats to pick up seats in the 2018 midterms, since some far-right Republicans could win primaries but prove too conservative to win a general election.

Vulnerable Senate Republicans, such as Jeff Flake of Arizona, and Dean Heller of Nevada, already face primary challenges from the right. Nasty and potentially costly primary battles could also be shaping up in Mississippi, Texas and Tennessee, where incumbent Sen. Bob Corker announced his retirement last week. Waiting in the wings to bankroll some of these challengers are deep-pocketed conservative donors like hedge-fund tycoon Robert Mercer and his daughter, Rebekah, a part owner of the far-right Breitbart News Network. The Mercers backed Moore in the Alabama primary, though they spent far less than McConnell and his allies.

This probably isn’t what McConnell had in mind when he helped convince the Supreme Court in 2010 to lift all limits on corporate political spending in its Citizens United v. Federal Election Commission ruling. The GOP calculus back then appeared to be that Republicans would have an easier time winning over corporate sugar daddies than Democrats would. Now some ultra-conservative billionaires are helping bankroll primary challengers in McConnell’s own party.

Big donors reportedly also played a key role in Republicans’ decision to hustle through a deeply flawed Senate bill to repeal the Obama health care law. Republican lawmakers are fond of warning that GOP voters will punish them if they didn’t follow through on their promises to repeal “Obamacare.” But behind the scenes, disappointed mega-donors appear to be the ones driving the repeal train. GOP governors and voters actually now broadly support Medicaid’s expansion, says Richard Fording, a political science professor at the University of Alabama, who noted that attacks on Obama resonate less with GOP voters now that he is no longer president.

“Just because you promised it six years ago doesn’t mean you have to follow through on it if voters changed their minds,” says Fording of the Obamacare repeal effort. Republicans, he added, “should be concerned about the election that’s happening in 2018, and not the one that happened in 2010.”

Congressional Republicans may also find it hard to sell to their party’s populist wing on a tax plan heavily tilted toward slashing taxes for corporations and the wealthy. The big-spending conservative group Americans for Prosperity, backed by the billionaire industrialists Charles and David Koch, is gearing up to spend millions to back the GOP tax overhaul. Yet large percentages of Republican voters favor raising corporate tax rates, not lowering them, and a majority think that taxes for those earning $250,000 a year should either stay the same or be raised.

It remains to be seen whether Democrats can capitalize on Republicans’ self-inflicted legislative failures and intra-party power struggles. Democrats have their own internal battles and cozy ties with big donors, while 10 Democratic senators are up for reelection in states won by Trump last year. But every GOP primary brawl drains Republican resources and creates a potential opening for Democrats. The Democrats’ ridicule of the GOP tax plan as “welfare” for the rich has a populist ring that is tailor made for the growing ranks of GOP primary challengers seeking to oust incumbent Republicans. 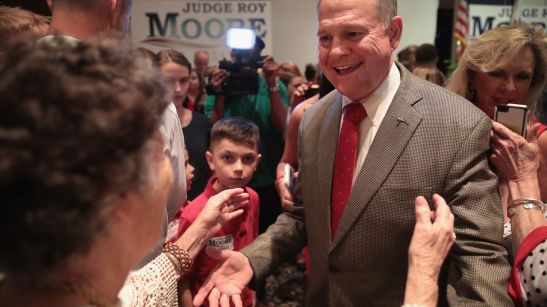 Roy Moore, Republican candidate for the US Senate in Alabama, greets supporters at an election-night rally after declaring victory on Sept. 26, 2017 in Montgomery, Alabama. Moore will now face Democratic candidate Doug Jones in the general election in December. (Photo by Scott Olson/Getty Images)