Marcelo Rochabrun: The Trump Administration Plans to End a Refugee Program for Children

Minors from violence-plagued El Salvador, Honduras and Guatemala will no longer be permitted to reunite with their parents in the United States.

The Trump administration plans to stop accepting refugee applications from children with U.S.-based parents from three violence-riddled Central American countries — El Salvador, Honduras and Guatemala — according to the summary of a presentation the State Department made recently to refugee organizations.

The decision to end the Central American Minors program, which began in 2014 and is the only refugee program aimed at helping people from that region, could put hundreds of families split between two countries in a delicate situation.

The children will no longer be able to come legally to the U.S. Of course, they can still attempt to cross without authorization and then either request asylum or try to navigate the border region without being detained or injured — just the kind of dangerous illegal immigration that the CAM program was meant to discourage. (And if the children do cross the border, as ProPublica recently reported, they could expose their parents to an investigation for child smuggling.)

“Ending the program would force desperate children into the arms of smugglers and traffickers because they don’t have a safe and orderly way to get to the U.S.,” said Lisa Frydman, a vice president of Kids In Need Of Defense, an immigration advocacy group. “This administration is giving the unconscionable message that Central American children are not welcome here for protection.”

Refugee organizations were alerted to the impending demise of CAM two weeks ago by State Department officials, according to a memo summarizing the meeting that was obtained by ProPublica.

“We were told that [the State Department Bureau of Population, Refugees and Migration] will begin winding down the CAM program in its entirety,” according to the summary, which circulated at one resettlement agency. “Please note that this information was conveyed to us in person (verbally) with no documentation that we can share with you at this time … the CAM refugee program will be discontinued no later than December 31, 2017, perhaps sooner.”

A State Department spokesperson said that “all aspects of the FY2018 resettlement program are under review” but added that “no decisions have been made.” Asked about the meeting with the refugee agencies, the spokesperson responded, “The State Department works closely with its resettlement partners and shares information as part of an ongoing dialogue and partnership. No formal announcement has been made to partners regarding the CAM program.”

CAM admissions had already dwindled to a trickle. In August, 19 Central American refugees were admitted. By comparison, 160 were admitted last December, the single highest month. Over the history of the program, 1,627 refugees entered the U.S. through CAM, the overwhelming majority of them from El Salvador.

In August, the Trump administration terminated a program that served as a sort of back-up to CAM. The program allowed children who failed to qualify as refugees to be allowed into the U.S. temporarily if they could show there was a compelling humanitarian reason. (Obtaining refugee status requires demonstrating a “well-founded fear of persecution for reasons of race, religion, nationality, political opinion or membership in a particular social group.” The definition of “humanitarian” is much broader.) That program allowed 1,465 minors to travel to the U.S. before its cancellation.

An additional 2,500 who were approved for the humanitarian program but had yet to make it to the U.S. had those approvals rescinded. “No more individuals will travel into the United States under this … program,” according to a letter from the U.S. Citizenship and Immigration Services agency that announced the cancellation. “As such, USCIS is rescinding your condition approval.”

So far this year, Central American refugees accounted for just 1 percent of the 51,000 refugees who have been admitted to the United States. Latin America overall accounts for only 3 percent of the total.

“The CAM refugee program has been a small but an incredibly critical lifeline for Central American children,” Frydman said. 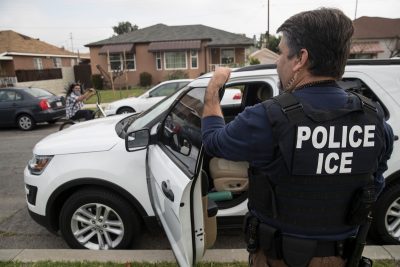 Relatives of Undocumented Children Caught Up in ICE Dragnet

In a shift from how it operated during the Obama administration, Immigration and Customs Enforcement is cracking down on relatives who let undocumented kids stay with them after entering the U.S.

The cancellation of CAM is one of many moves the Trump administration has taken to discourage immigration from Latin America.

This month, the Trump administration announced the phaseout of DACA, a program for 800,000 young undocumented immigrants who are overwhelmingly from Mexico and Central America. Earlier this year, the Department of Homeland Security announced that it will soon end protections from deportation for 50,000 Haitians, and floated the possibility of doing the same with 200,000 Salvadorans, 60,000 Hondurans, and 3,000 Nicaraguans by next March.

DHS has also sought to detain all asylum applicants, who are mostly from Venezuela and Central America, until their cases are adjudicated, which can take years. And it has sought to swiftly deport all illegal border crossers, overwhelmingly Mexicans and Central Americans, to Mexico, even if they aren’t Mexican.

The agency has endorsed slashing legal immigration by half. VICE reported this week that next year the U.S. will accept a historically low number of refugees from around the world.

The CAM program was launched in 2014 amid an exponential surge of Central American children who crossed the U.S.-Mexico border illegally, most of them claiming they had parents or other relatives in the U.S. To qualify for CAM, parents must be legally allowed to be in the U.S. and children must pass a DNA test proving they are the offspring of the person or people in question. (The tests cost the families close to $600.) The process takes an average of 13 months and about 75 percent of the refugee applications were denied.

It’s unclear how many applications are pending, but the number is likely to be in the thousands, based on figures from 2016. It’s also unclear what will happen to pending applications once the cancellation of the program takes effect.

“Usually, there is an attempt to have an orderly wind down and people who would be in the pipeline would be completed, their cases would be completed,” said Doris Meissner, a senior fellow at the Migration Policy Institute and a commissioner of the Immigration and Naturalization Service under Bill Clinton. “But we’ve certainly seen in others aspects of what the new administration has done, that they haven’t necessarily being so orderly.”

Marcelo Rochabrun is a senior reporting fellow at ProPublica, where he covers immigration.

Unaccompanied minors from El Salvador await transport to a U.S. Border Patrol processing center after they crossed the Rio Grande from Mexico into the United States in Mission, Texas. (John Moore/Getty Images)