John Samuel Tieman: How many Fergusons is it going to take?

I am from St. Louis. To be specific, I am from an inner ring suburb, University City. As I write, my community is embroiled in its fourth night of demonstrations and disruptions, several of which have turned violent.
Jason Stockley, 36, a white St. Louis policeman, was charged in May 2016 with first-degree murder, second-degree murder, and armed criminal action in the shooting death of Anthony Lamar Smith, 24, who was Black. Stockley was acquitted on all counts.
This is almost certainly a miscarriage of justice. But we lose the larger issues by debating the particulars of this case, which, bluntly, is over now. What we can know for certain is that there is a problem in this town with racism, poverty, guns, violence and policing.

Just before he shot Smith dead, that cop said, “I’m going to kill this motherfucker.” That’s recorded. Then he shot him. If a Black man said of a white cop, “I’m going to kill this motherfucker,” then did — would there be any question about premeditated murder? In the old days, the “Make America Great Again” days, that Black man would have never made it to the police station.
About the broader issues. This is St. Louis. Virtually segregated schools. Economic injustice. White flight. This familiar litany can go on ad infinitum. But the greatest pain of racism is to tell someone that, because of the color of their skin, they will spend their life unwanted, unloved, and uncared for.
So what do we do right now?

Three tactics and a goal. Tactic 1) Concentrate the news on the dialogue rather than the disruption. 2) Bring pain to the pocketbook. 3) Keep your focus on the right pocketbook. These are the tactics. The goal should be the adoption of the solutions offered by the Ferguson Commission in its report, “Forward Through Ferguson,” solutions that were, let’s be blunt, all but ignored.
About those tactics. First, we need to concentrate on the dialogue rather than the disruption. On Friday, the home of the mayor of St. Louis was pelted with rocks. A library had it’s windows smashed. A news story, which includes conflict and broken glass, is a better read. It is sensational. No one is blaming the news for truly reporting. However, more time should be given to, as just two examples, State Representative Bruce Franks (D-St. Louis), who calling for civilian oversight of internal police investigations, or Aldermanic President Lewis Reed (D), who is calling for police body cameras.
Dialogue takes work. And we live in Tweet World. Not long ago, a four minute TV segment was described as “in depth coverage”. But it can be done if we force people to concentrate by focusing the public’s attention.
So how do we get the public’s attention?
Bring pain to the pocketbook. “No Peace, No Profits.” Demonstrators are going to suburban malls. A U2 concert and and Ed Sheeran concert were cancelled. The call is for dialogue leading to justice. Until that time, no one will profit in a town without justice.

Bring pain to the pocketbook. “No Peace, No Profits.” This is as American as the Boston Tea Party.

But let us keep our focus on the right pocketbook.
On Saturday, there were protests just down the street and over the hill from where I am writing right now. Folks were peaceful, and most went home about 9 PM. Starting around ten, the remaining protesters, about 100 of them, broke out windows in 23 stores. And it makes me furious.
My home, this community, University City is by far the most liberal community in Missouri. (Of course, it’s Missouri, so that’s not a high bar.) Folks often choose to live here because of the diversity, tolerance, inclusion, because of the mix of religions, races, languages and so on. It sometimes feels like a small town. The old business district, The Loop, is dominated by small shops, art galleries, locally owned restaurants. Indeed, this local ownership is much of what gives The Loop its charm. When the demonstrators first showed up, these same shopkeeps and restaurant owners offered the demonstrators refreshments. We’re that kind of community. For which folks got their windows broken out.
What is the cost of a broken window? Yes, such a window can cost a small shopkeeper perhaps $1,000. But what does it cost a cause when you smash the window of someone who agrees with you?
Constructive focus that leads to dialogue, that is what gets things done. In St. Louis right now, there is more than enough energy to push for genuine reform.
Therefore, it is worth repeating – what do we do? Three tactics. 1) Concentrate the news on the dialogue rather than the disruption.2) Bring pain to the pocketbook. 3) Keep your focus on the right pocketbook.

“Forward Through Ferguson” proposed 189 reforms to tackle inequality. Some of these included establishing stricter standards for police use of force, raising the minimum wage, expanding Medicaid, improving social services. The only thing lacking – until now – is the will to adopt these proposals.
—
Copyright 2017 John Samuel Tieman
. 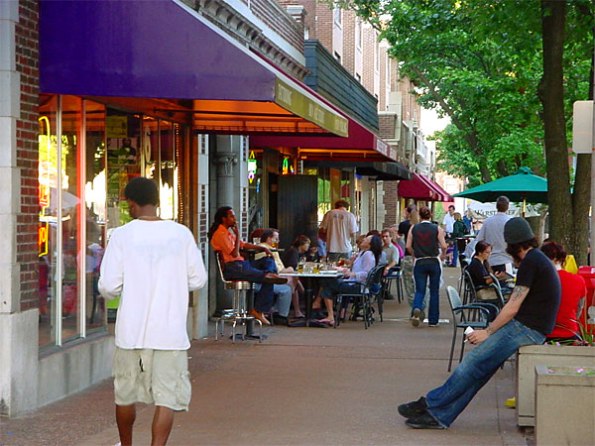 The Loop on a good day 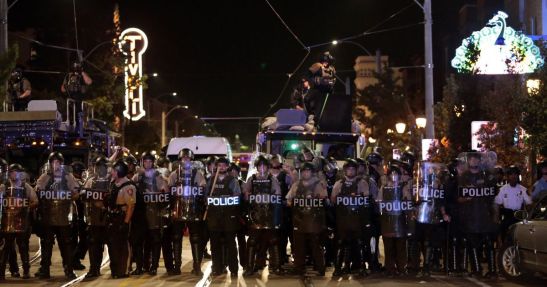 5 comments on “John Samuel Tieman: How many Fergusons is it going to take?”

This entry was posted on September 20, 2017 by Vox Populi in Personal Essays, Social Justice and tagged Anthony Lamar Smith, Ferguson, How many Fergusons is it going to take?, Jason Stockley, john Samuel Tieman.