Editor’s note: A Berkeley, Calif., rally organized by a right-wing group turned violent Sunday after arrival of a group that carried an anarchist banner.

The two opposing groups, largely made up of people who have been cast aside by the cruelty of corporate capitalism, have embraced holy war. Their lives, battered by economic misery and social marginalization, have suddenly been filled with meaning. They hold themselves up as the vanguard of the oppressed. They arrogate to themselves the right to use force to silence those they define as the enemy. They sanctify anger. They are infected with the dark, adrenaline-driven urge for confrontation that arises among the disenfranchised when a democracy ceases to function. They are separated, as Sigmund Freud wrote of those who engage in fratricide, by the “narcissism of minor differences.” They mirror each other, not only ideologically but also physically—armed and dressed in black, the color of fascism and the color of death.

It was inevitable that we would reach this point. The corporate state has seized and corrupted all democratic institutions, including the two main political parties, to serve the interests of corporate power and maximize global corporate profits. There is no justice in the courts. There is no possibility for reform in the legislative bodies. The executive branch is a dysfunctional mess headed by a narcissistic kleptocrat, con artist and pathological liar. Money has replaced the vote. The consent of the governed is a joke. Our most basic constitutional rights, including the rights to privacy and due process, have been taken from us by judicial fiat. The economically marginalized, now a majority of the country, have been rendered invisible by a corporate media dominated by highly paid courtiers spewing out meaningless political and celebrity gossip and trivia as if it were news. The corporate state, unimpeded, is pillaging and looting the carcass of the country and government, along with the natural world, for the personal gain of the 1 percent. It daily locks away in cages the poor, especially poor people of color, discarding the vulnerable as human refuse.

A government that is paralyzed and unable and unwilling to address the rudimentary needs of its citizens, as I saw in the former Yugoslavia and as history has shown with the Weimar Republic and czarist Russia, eventually empowers violent extremists. Economic and social marginalization is the lifeblood of extremist groups. Without it they wither and die. Extremism, as the social critic Christopher Lasch wrote, is “a refuge from the terrors of inner life.”

The violence by antifa—short for anti-fascist or anti-fascist action—in Charlottesville, Va., saw a surge in interest and support for the movement, especially after the murder of Heather Heyer. The Black Bloc was applauded by some of the counterprotesters in Boston during an alt-right rally thereAug. 19. In Charlottesville, antifa activists filled the vacuum left by a passive police force, holding off neo-Nazi thugs who threatened Cornel West and clergy who were protesting against the white nationalist event. This was a propaganda coup for antifa, which seeks to portray its use of violence as legitimate self-defense. Protecting West and the clergy members from physical assault was admirable. But this single act no more legitimizes antifa violence than the turkeys, Christmas gifts and Fourth of July fireworks that John Gotti gave to his neighbors legitimized the violence of the Gambino crime family. Antifa, like the alt-right, is the product of a diseased society. [continue reading] 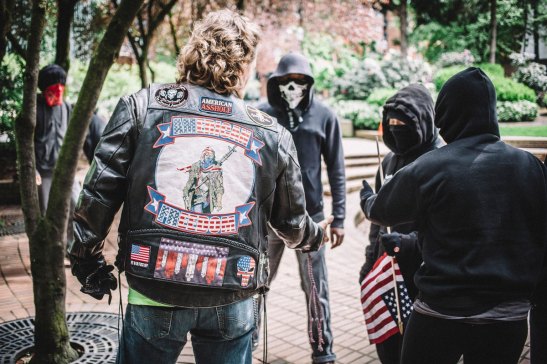 A right-wing biker squares off with masked antifa May 13, 2017 in Portland.

One comment on “Chris Hedges: How ‘Antifa’ Mirrors the ‘Alt-Right’”