I had left the Colonel and his kitchen behind for good

and was detoxing as a movie theater usher in the last

of my senior year of high school, but fifteen to

twenty hours a week couldn’t hold me for long

when I was used to forty and overtime during the school

year. I don’t know what I would have done if my

father—who had just lost the only job I had ever

known him to have at Camp Aldersgate for reasons

himself and knew a Rotary Club friend who was trying

to hook him up with a job at Worthen Bank & Trust

in a security guard position, the only thing a former

camp director and State Social Worker of the Year

seemed qualified for at the moment. But I was different.

A high school whiz kid invited to take the IBM

programmer’s test at eighteen, the friend’s

to get in early on that so an interview was arranged,

but it was just a formality until I started answering

the drug questions on the test honestly—“Had I used

he told me he wouldn’t tell my father, that this was

confidential, but he wanted to know if I was using now,

and I could answer, “No,” that I stopped when I quit

working for the Colonel three months before,

and he said we would start over, that I should answer

only what I was doing now, and in the future I should act

as if my past was that of another person, a person

I didn’t know anymore. So I got the job, a salary man

with benefits, working the 11 to 7 shift five days a week,

two weeks of paid vacation a year, and I liked it well enough,

would leave the bank at 7 a.m. on Tuesdays through Fridays,

to Parkview High School for my Zero Hour class at 7:15

and after my school day ended at 2:30 I would try to sleep

until evening when I’d get up about 9 p.m. and have breakfast,

start all over again turning my days into night or vice versa.

I held onto one shift on the weekends at the movie theater,

just in case, except on end of the months because they said

those could get crazy, and in my first month, January 1981,

I found out when the computers kept overheating and we

needing to finish it for the integrity of the process.

to worry about, though we never talked about what

I’d do on a school day if trouble happened.

outside the elevators were fun, and it was cool to have

our supervisor buy us breakfast, lunch, and dinner,

keeping us in snacks and sodas, though if I hadn’t

been around I think they might have split a six-pack

or two. Still, after that, I knew I hated computers

by the end of it, would never build my life around those

capricious machines, and after being the good employee

for February, I tendered my resignation March 1.

They were a little put out, but had to accept my bullshit about

needing to focus on school, and they asked if I would closeout

the month and train a replacement, and I thought that was fair.

Their choice was Mark, a twenty-five-year-old former

who had been with the bank for seven years, a nice enough fellow

sweetheart, start a family as soon as they could—she was

a good Christian girl saving herself and this promotion would

speed everything up. I had never thought I was making more

than many of the men I worked with, an all-male shop at night

where I heard complaints about car payments and mortgages.

I waited for the moment each weekday morning

when the women arrived  in sensible shoes carrying their heels

and wearing perfume that smelled like heaven must smell.

I was responsible for some little banks up in Northwest Arkansas

business, but my main responsibility was the bank’s own

checking accounts. The man who trained me called it

“decollating” for some reason, and as I collated

the reams of computer printouts each night, I made sure

the numbers from one set matched the other. If they didn’t,

I had to stop everything and make them run the numbers

over and over until everything matched and the bank

could pretend everything was in balance until the next night.

It was likely I had to stop things every third or fourth night,

and the men in the shop hated me, not just because I was a punk

kid making as much or more than most of them, but because

when I did my job it meant they had to stop, sit around, and wait.

Mark was moving over from microfiche, ready to trade

developing fluid for paper cuts. I thought he was learning okay,

at the University of Central Arkansas in Conway. It was amazing.

He talked about art as a condition of life, a person only had to

find the proper medium, and he told a story about being

at the writers’ colony Yaddo as a young man, a frustrated novelist

the playwright Thornton Wilder skipping stones into a lake

and told him about his problem. Wilder said, “Have you tried

writing plays?” The light came on for him right then.

That Friday night, I showed up to see my father’s friend,

our department head in our supervisor’s office along with two

serious-looking men and Mark. Mark didn’t look good. I was called in,

and before I could sit down, my supervisor said, “Last night you two

“I don’t have it.” At least I caught myself before I added,

Do you think I would be here if I did? Still, they weren’t amused.

to finish their work when one of the printouts read $4.2 million

and the other read $42 million. Unfortunately, the $4.2 million

was the operating balance so the bank had opened that day

with only that amount of available funds. Every check written

and cashed that day once the bank passed the $4.2 million

the computers thought the bank had available bounced,

resulting in around $50,000 in overdraft fees the bank

would have to pay itself. I stayed silent, but I didn’t see

what the real problem was. After a little more haranguing,

they sent us back to work. The end of the month was only

a few days away, and they wouldn’t try to train anyone else

on that short notice. Mark was a wreck all night, took bathroom

breaks more than I’d ever seen, and when our shift ended

he took the elevator down with me and some of the other guys.

Everyone seemed to know about the mistake, ribbed us about

what we were going to do with all that money, and when they cleared out,

Mark asked me f I wanted to hang out, get high to unwind,

and though I had quit smoking a few months before, I couldn’t think then

of a reason to say No. We both needed this. We walked past my Civic

to his muscle car, a black Trans Am like in Smokey and the Bandit.

Mark must have rolled the joint earlier in the bathroom, the reason

for all those breaks, and he pulled out of the underground garage,

handed the joint to me when we got clear of the security cameras.

I lit up, took a long toke, then handed him the joint. The pot

wasn’t much better than ditchweed, but the acrid flavor

tasted right for the occasion. As the smoke and our words

filled the car, Mark told me about the beautiful life

he had planned with a beautiful house in Pleasant Valley,

with his beautiful wife. He showed me a picture and she was.

The music came on AC/DC’s “Highway to Hell,” and we pulled onto

the Arkansas River Bridge blasting that song, a pink and gray sunrise

still blazing across the sky, for a little while everything adding up. 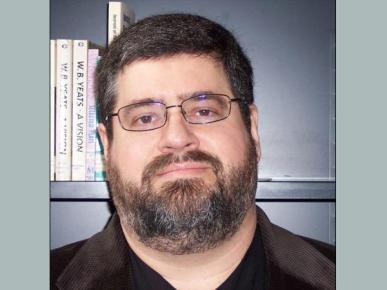