Your death interrupts nothing.

program a show to tape on Tivo.

and wonder if there’s a bleach for grief.

Feed the birds and it occurs to me

they’re illiterate. Tonight I too

There’s a Mayan temple you caught with

your lithograph on my brother’s wall and

the mailman disrupts my stare out

for something I forget on the porch.

A neighbor installs an antenna.

That’s what survives, you said – beauty is a need

like thirst and sex – that even in the Neolithic,

even in a cave, a man once painted

his own hand and was joined by the hands

of others, you said. I don’t remember anything

you said about God. But once you believed

in a Mexican woman, in a load of impossible

vegetables balanced on her head and you stared

at her and after her and you said, “Did you see her?

Did you see her?” 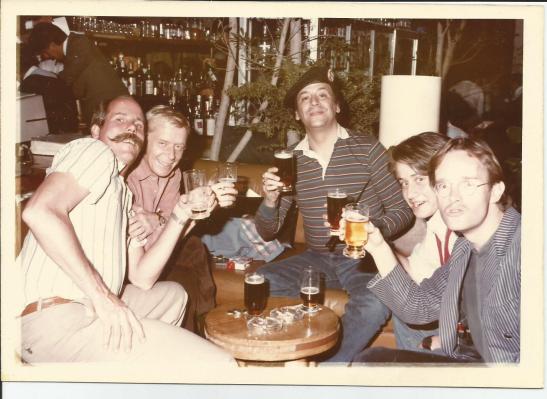 “After school, 1985, the lounge of the El Presidente Hotel in Polanco, a colonia in Mexico City, the night I was voted Regal Rat by The Empire Club, an honor I still hold dear. I’m the one in the hat. Gordon is on my right.” — jst

One comment on “John Samuel Tieman: Elegy For A Painter”

This entry was posted on July 12, 2017 by Vox Populi in Art and Cinema, Poetry and tagged Elegy for a Painter, Gordon Gilchrist, john Samuel Tieman.