Claims it was a practical joke that got out of hand.

According to detailed notes taken during their private meeting in Hamburg, Germany, the Great American President, Donald Trump, sternly confronted President Vladimir Putin.  At the meeting, Trump asked Putin, “Your Honorable and Presidential Sir Vladimir, did you order anyone to hack into our election last year?  I mean the cable networks, CNN, CIA and NSA, they keeping saying you did. You didn’t do that, did you?”

President Vladimir Putin reportedly lowered his head and confessed on the spot.  “I am so sorry, Donald. Your Excellency, my friend, it was all just a big practical joke! This has been on my conscience for months; I’ve been dying to tell you.  No offense, it worked out for you, yes? But we didn’t mean to help you win!  It all happened like this: We were sitting around, drinking vodka and my head of the FSB, Boris Badenov, he said to me, ‘Wouldn’t it be funny, to smear the intertubes with false news stories about poor Hillary being Hitler reincarnated, and a child porn pizza queen? We can peek into Hillary’s emails and then use bloggers and bots to flood the news with jokes and playful nonsense, just for fun! Just for fun!’

Putin continued. “Well, Donald, I’m sure you can imagine, I laughed so hard at Boris. I said, ‘Who will believe it?  The Americans aren’t that gullible!’  Boris laughed too. He said, ‘No one will, of course! It’ll be the biggest joke ever, and Hillary will love it! The world will finally know what a funny teddy bear our Russian President really is! You and Hillary are such great friends; you know she’ll get a big kick out of it, right?’

“Donald, I couldn’t resist.  You see, Hillary and I had a red-hot love affair, way back.  Me being the Most Virile President of Russia ever, she had a thing for me, and blondes, well, I couldn’t resist that either.  We are still great friends, and I was certain such a great joke would make her, and even the entire world, laugh out loud. As everyone knows, we Russians love to joke.”

“Of course!  Great, virile men like us, we know how to treat women. And they all adore us, even though they never admit it. But let’s keep that story our little secret, all right?”

“Donald, I’ll tell you another secret. I never really wanted to be the President of Russia. I’ve always wanted to be a comedian, like that funny man on American television, Stephen Colbert? I love that man.”

“Well, I mean he is kind of funny.  Or maybe a priest, I’ve always wanted to give Holy Communion. Anyway, it was just a great big joke, gone bad. In the Kremlin, we all respect, no, let me say it right now: Donald, we worship American Democracy. Trust me.  Playing with your election was the biggest mistake ever. An accident.  We are all so sorry. I’m having Boris executed, an accident.”

Trump grimaced. “Wow. I wish I could do that.”

The two men stood, both with tears in their eyes. President Trump hugged his Great Russian Friend.  “I know you didn’t mean to mess with the election.  I’ve know it all along.  People make mistakes. We’re only human. Thank you, Vlad. You are a great man.”

“Thank you, Donald. You are great as well. The greatest, manliest American President.”

“I know! It is great that two great and sexy men can be such great friends. So, what about Syria?”

“We’re out of there, pulling our military out as we speak. You should too.”

“I’ll call in the order immediately. And this other thing, Ukraine?”

“The Democrats keep crying about it. I don’t even know where it is. South of Alaska maybe? Sounds Canadian.”

“I’m not good with maps. But if I don’t know where it is, then I’m quite sure we’re not there! You can believe me, my great friend.”

“That’s great!  I’ll tell Pelosi, the Russians aren’t in Alaska or Canada, so no problem!”

“Do I? I’m privatizing the US Navy, taking investors! Twenty billion minimum. Have your banker call Cyprus, I’ll make you the greatest deal.” 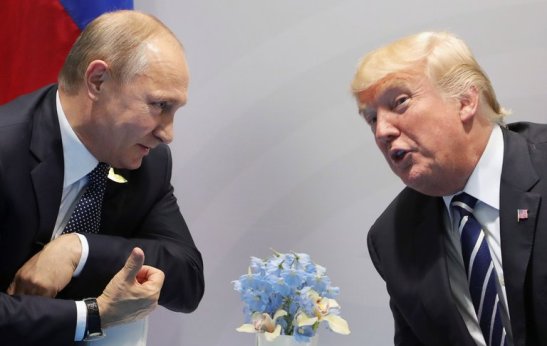 President Trump and President Vladimir V. Putin of Russia met at the Group of 20 summit meeting in Hamburg, Germany, on Friday.