We’ll Take Our Comic Relief Where We Can Get It Dept:

The ghastliness of the Conservative Political Action Committee (CPAC) conclave and Herr Trump’s abject nightmare of a speech was leavened just a tad by an epic troll that had patriotic Trumpsters giddily waving what turned out to be 1,000 red, white and blue Russian flags, albeit stamped with their fearless leader’s name. It took CPAC staffers a while to notice the flags, after which they hustled to confiscate them and throw out the activists who’d distributed them: Jason Charter and Ryan Clayton, both members of Americans Take Action, a progressive resistance movement aimed at impeaching Trump. Charter just had time to shout “Fascist” at Trump before being ejected; Clayton later had a moment to explain, in a heavy Russian accent, why he’d come: “Because Trump great man, very strong, he build great wall, put people in cage, kill journalists he don’t like.” And because nothing says American patriotism like waving Russian flags at a gathering of frenzied, hateful, mindlessly indoctrinated totalitarians celebrating one of their deranged own. 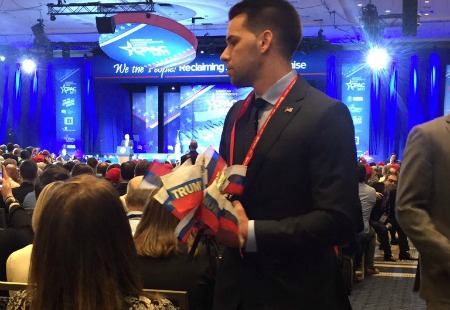