With Senate confirmation hearings slated to begin next week, resistance to the appalling notion of an Attorney General Jeff Sessions is growing fast, as it should. Tuesday saw a sit-in at Sessions’ Mobile office by about two dozen activists and members of Alabama NAACP, who vowed to occupy the office until they were arrested or Sessions withdraws from the nomination. As the afternoon wore on, they were approached by the building’s owner, who asked if they would be willing to leave without arrest. The response by National NAACP President Cornell W. Brooks: “That’s not how the NAACP works.” Shortly after 6:30, Brooks and several others were arrested by police. Before being taken away, they declared their right to civil disobedience, knelt and prayed.

NAACP actions and news conferences were also staged in Montgomery and at other Sessions offices across Alabama to highlight his long sordid history of racism, from his prosecution of civil rights activists in 1985 to his criticism of the NAACP as “un-American” and approval of the KKK as “O.K,” which helped derail his 1986 federal judgeship. Said Brooks at one press conference, “As a matter of conscience and conviction, we can neither be mute nor mumble our opposition.” Underlying his point, Brooks later, proudly posted his and others’ mugshots under the tag #ThingsIWont Apologize For.

On the same day, the nomination was likewise blasted in an extraordinary open letter signed by 1140 faculty members from 171 law schools in 49 states across the country – all except North Dakota and Alaska, which have no law schools. Urging the Senate to reject the nomination, the law professors, most of whom signed on within 72 hours, argue, remarkably, “We are convinced that Jeff Sessions will not fairly enforce our nation’s laws and promote justice and equality in the United States.”

They highlight his opposition to women’s and LGBTQ rights along with his infamous rejection for the long-ago federal judgeship. “Nothing in Senator Sessions’ public life since 1986,” the letter states, “has convinced us that he is a different man than the 39-year-old attorney who was deemed too racially insensitive to be a (judge)…All of us believe it is unacceptable for someone with Senator Sessions’ record to lead the Department of Justice.”
—– 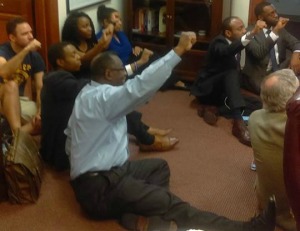