A Trump Presidency is a Clear and Present Danger

Donald Trump is not mentally well. We’ve witnessed him for years now, exhibiting behaviors that are much more child-like than adult. Three leading professors of psychiatry have written to President Obama expressing their urgent concerns that Trump is deeply afflicted with Narcissistic Personality Disorder, an extremely dangerous condition for an American president to have. Donald is hyper-sensitive to criticism, to the point of being emotionally erratic and unpredictable. Trump has a fantastical and fragile sense of self-importance that needs continuous reassurance by those around him, and if he doesn’t receive that reassurance, he rapidly veers into the irrational weeds, tweeting outrageous, whiney, and provocative attacks at 3:00 am. When feeling attacked in a debate, Trump promises to jail Hillary Clinton. This is not mental stability.

When made fun of in a comedy skit, Trump responds immediately and angrily. In an early morning tweet, his favorite platform, Trump threatened that anyone burning the American flag should lose citizenship or be jailed for a year.

When the cast of the Broadway play Hamilton expressed concerns of many Americans who have felt threatened by Trump’s campaign, Trump claimed that the theater should be “safe” from critical speech and demanded that the actors “Apologize!” Apologize? Nearly worldwide, theater has for centuries been the primary forum for social and political commentary. Trump’s demand for an apology is infantile and authoritarian, and reveals a mindset resembling that of Kim Jong Un.

Thousands protested in American cities following Trump’s election to express their deep dismay and concern, and his reaction was to tweet that such activities were “Unfair!” Trump by his own examples, encourages the worst behavior in his supporters, and those of us shocked by the absence of civility and the orgy of falsehoods and racism he spreads, are supposed to stop complaining and go home. After bragging about the joy he derives from sexually assaulting women by grabbing their genitals, cornering and kissing them, groping them, Trump was outraged and threatened to sue those women who came forward to confirm his claims. Infantile.

When fact-checked for some of the many provocative and false claims Trump has made, he claimed that he was “treated very roughly” by the media. When CNN and other outlets reported Trump’s blatant conflicts of interest that resulted from his discussing his business interests while meeting with foreign leaders as president-elect, he attacked the media a “crooked”.

During a campaign rally, Trump physically mocked a disabled reporter who challenged Trump’s false claim that he witnessed thousands of Muslims celebrating in New Jersey as the Twin Towers fell.

During a presidential debate, when Trump was pressed by moderator Megyn Kelly about the misogynistic, sexist comments he’s made, such as calling some women “fat pigs, dogs, slobs, and disgusting animals,” Trump responded that her questions were “ridiculous” and “off-base.” Later, he stated on CNN that “You could see there was blood coming out of her eyes. Blood coming out of her wherever.”

Trump’s highly reactive, immature, authoritarian personality is revealed brightly by his statement that New York City’s Stop and Frisk program should be adopted nationwide, even though it has already been ruled unconstitutional and banned there.

What is glaringly clear is that Trump is unable to control himself. As he has proven time and again, anyone disagreeing with him becomes his instant enemy. Trump uses twitter as his instant payback channel, where without any thought of the consequences, he rages his revenge. Trump worships revenge, has expressed a life-long obsession with revenge in several speeches going back years:

“Get even with people. If they screw you, screw them back 10 times as hard. I really believe it.”

And: “If somebody hits you, you’ve got to hit ’em back five times harder than they ever thought possible. You’ve got to get even. Get even.”

And: “It’s not so much for the person, which does make you feel good, to be honest with you, I’ve done it many times.” Trump gets emotional gratification by taking revenge whenever possible.

And: “‘Always get even. When you are in business, you need to get even with people who screw you.’ – Think Big.”

The president of the US takes a barrage of provocations on a daily basis, sometimes by the press and entertainers, and sometimes by foreign leaders, even to simply antagonize. As proven by his 3:00 am tweets, his speeches, his gesticulations, and his bellowing, Trump cannot control himself. Trump’s fragile ego clearly doesn’t handle criticism or provocation; he must strike back. As leader of the most powerful nation on Earth, if a foreign leader insults Trump personally, deeply, before the eyes of the world, can we really assume that Trump will not strike back with everything he can, with the full force of the US military?

The decision to launch an American nuclear strike is not a democratic one. The president alone has that capability. There is no fail safe; no other member of America’s government or military can veto an American president’s decision to annihilate another country. Is it possible that Donald Trump, unsupervised early one morning, could become so enraged as to do the unthinkable, and then realize the error only after it’s too late? Look at Donald Trump, and then, please, think about that.

For any person, the American presidency is the most powerful and most demanding job on the face of the Earth.

Donald Trump is clearly not the person to take this job. 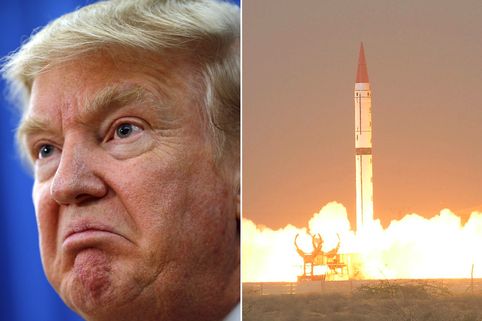