Few things are more awesome than listening to kids playing on the playground. There’s magic in that mix of laughter and exhausted breaths — giggle, pant, giggle.

Just the other Saturday at Maplewood’s Memorial Park, I was watching my 5-year-old playing with his friends from day care. The kids have just started kindergarten and are now split up among four schools. Some industrious mom had the idea to get them together again.

It was a great idea. It was also the moment when I saw the messy birth of my son’s otherness.

They were playing on one of those spinning things — you know, the one where kids learn about centrifugal force and as a bonus get crazy dizzy. They were having a blast.

I heard it, but I wasn’t quite sure that’s what I heard.

“Not you, you’re black,” said the girl, reaching out to touch my son. “You’re not white. Only white people can play.”

I couldn’t escape the searing historical parallels of a little white girl telling a little black boy — my son — what he can and cannot do because of his skin color.

My instinct was to go over and drop science on her and all of the other little children.

But then my systems kicked in. My automatic scary-black-man recalibration systems. The infinitesimal adjustments that black men employ not only to succeed in school and at work, but also to help us keep it 100, stay woke, all while trying to make white folks feel comfortable enough to keep us around.

Whether it’s turning down your Kendrick Lamar when the white woman gets on the elevator or flashing those disarming smiles at white women you pass at night on the sidewalk, black men learn to present safeness.

Why do I always have to make white people feel comfortable at the expense of who I am and my mood and my music and my thoughts?

Walter Scott — and every other unarmed black man killed by police officers — is why.

To support a family is why.

If I scared the white people at the playground with my reaction, what would be the impact on our little family in Maplewood? Would we be on the next email thread for a play date? Would the other families talk about my son’s angry dad?

I made all these calculations in the five seconds after he was told he couldn’t play because he was black.

Then I noticed my son. When the little racist girl reached out to touch him, he moved out of the way and laughed. He kept right on playing.

The garbage that came out of that child’s mouth meant nothing to him. Yet. It marks the beginning of what is likely to be a gradual process. One day he’ll wonder why, when he plays with a certain group of friends, he is always the villain. Similar inquiries will follow, until he has his own system of recalibrations and adjustments.

I knew a moment like this would happen eventually. I just didn’t think it would happen at age 5 on the playground.

And what of the little girl? She, too, is a casualty in this — infected by racism before she can even spell the word.

It would be easy to dismiss the whole exchange as kids being kids. She’s young enough that she hasn’t developed the filters to catch what she’s being taught at home. There’s a direct line from what she’s learning to her mouth. I thought about all the time my son spent with this child in his day care class. What else had she expressed to him, or to the other students about him?

Besides the idea that, just by virtue of her complexion, she is more entitled to something as simple as spinning on the playground.

Who will she become when she grows up? Will she be a prosecutor, a manager at a tech firm, a politician? Systemic racism apparently begins at the playground.

I was still processing the incident while my son and his friends ran over to the slides.

I turned to the parent closest to me, who hadn’t heard the exchange.

The dad told me the girl’s name and pointed out her mother. The mom was standing about a dozen feet away in a group of other moms talking about how the kids were adjusting to kindergarten.

I tried to imagine a productive confrontation, but couldn’t get beyond my opening line: “Excuse me, can we talk about the racist trash that just came out of your daughter’s mouth?”

I told the dad next to me what had happened. He didn’t know what to say, because honestly, who really does? He unfortunately did what a lot of white people do in these moments: He tried to explain it.

“Really?” he said. “That’s not her personality.”

In the end I did nothing.

I agonized over it, of course. My wife and I have since had several discussions about what we could have done, what should have been said, and to whom. At one point I decided that the thing to do would have been to bring the matter directly to the parent. But leaving the children out of it didn’t seem right.

I recalled a moment from my childhood in Hawaii. One of my best friends, Dominic, was white. He was from a big family and being at his house was like stepping into an ’80s sitcom. I was over there all the time. Dominic’s dad was my mom’s boss on the Air Force base.

But one day, when I asked my mother if I could go to Dominic’s, she said no. She said the same thing the next time I asked, and the next. After a few weeks, I gave up.

It wasn’t until I was an adult that I heard the story. Dominic’s family was having a party. We kids were probably in front of the Nintendo or running around the yard. The parents were inside, talking about the New York Knicks’ full name, the Knickerbockers. “Their real name should be the New York Nigger-bockers,” Dominic’s mom said, with a laugh.

My mother, the only black person at the party, gathered her things, found me and told me it was time to go.

I don’t blame my mother for not explaining. But I would have benefited from knowing what had happened.

Two years later, my mother and I moved to Montgomery, Ala. I walked into the halls of Alabama’s public schools completely unprepared for the racial dynamics that would meet me there. It was an intense couple of years as I received a middle-schooler’s crash course in racial truths.

Sitting here today, with the string of black men dying on camera at the hands of government agents who are often not held accountable, and with a major presidential candidate who passively, if not wholeheartedly, accepts the admiration of the K.K.K. and other white supremacist groups, I must make a different decision from my mother.

My son has watched too many boys and men that look like him die before his eyes on television. We don’t shield him from those images.

His mother and I exchange looks. I try to answer. Best I can. He pauses, then he’s back to his Hot Wheels races.

So as I mulled how I could have handled the incident at the playground and how I will handle it the next time — because, sadly, there will be a next time — I rejected the idea of simply talking to the parents.

Instead I will interrupt the children as they play, or study, or swim in the pool. I will do this for three reasons.

First, the children being groomed to be racist need to learn that acting on their racism has consequences, the least of which is that they will be met with resistance. The children have to see that people will stand up to them and call out their ignorance.

Second, all the white children in earshot also need to see that resistance and be taught that standing by silently is an endorsement.

And most important, I have to model for my children ways for them to confront racism without going all scorched earth. They need to see from their parents how to speak to ignorance, wield their dignity and push back against individual and systematic efforts to define, limit and exclude them.

During the walk home from the playground, my wife, my son and I talked about race while our 2-year-old daughter listened from her stroller.

My son nodded and said, “Yes, sir,” the way a 5-year-old does. It wasn’t our first conversation on the subject. My wife and I have been very deliberate in our attempt to introduce him to concepts of race and history. The goal is for him to be confident, keen, yet still open-minded about those around him — a goal many adults are still striving for.

It’s clear that someone in that little girl’s life is pursuing a different goal.

We don’t have a choice but to talk to our son about Ferguson, Eric Garner, workplace frictions, Baltimore, Charlotte, Alton Sterling and on and on. And yet I mourn each of those conversations. With each degree of awareness comes a corresponding loss — of silliness, of whimsy, of childhood. 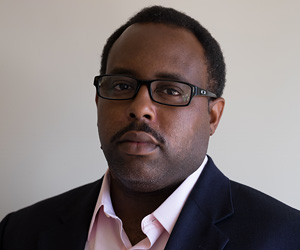 Topher Sanders covers racial inequality for ProPublica. He has reported on education and city government for The Florida Times-Union since 2008. Named to the investigative team in 2013, he became the paper’s investigative editor in 2014.