There were bizarre beginnings in old lands for the making

of me. There were sugar sands and islands of fern and

pearl, palm jungles and stretches of a never-ending sea.

There were the wooing nights of tropical lands and the cool

hills. They nurtured my coming with wanderlust. I

sucked fevers of adventure through my veins with my

Someday I shall go to the tropical lands of my birth, to the

coasts of continents and the tiny wharves of island

shores. I shall roam the Balkans and the hot lanes of

Africa and Asia. I shall stand on mountain tops and

gaze on fertile homes below.

Panama and Bocas del Toro to the littered streets and

the one-room shacks of my old poverty, and blazing suns

of other lands may struggle then to reconcile the pride

and pain in me.

Reprinted from the Internet Poetry Archive sponsored by the University of North Carolina Press. For educational use only. 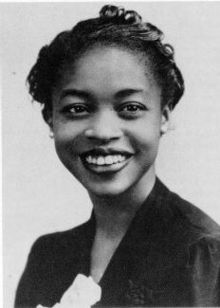 Margaret Walker (1915 – 1998) was an American poet and writer born in Birmingham, Alabama. She was part of the African-American literary movement in Chicago. Her notable works include the award-winning poem For My People (1942) and the novel Jubilee (1966), set in the South during the American Civil War.