Developers of the $3.8 billion Dakota Access (also known as the Bakken) Pipeline filed suit in federal court on Monday against members of the Standing Rock Sioux tribe, whose days-long civil disobedience campaign last week stalled construction of the 1,200-mile pipeline.

Dakota Access LLC is “seeking restraining orders and unspecified monetary damages,” the Associated Press reports. In court papers, the companies argue that the tribal activists “have created and will continue to create a risk of bodily injury and harm to Dakota Access employees and contractors, as well as to law enforcement personnel and other individuals at the construction site.”

But the tribal members contend that the U.S. Army Corps of Engineers quietly approved the project last month without proper consultation or consent, despite the fact that it runs within a half-mile of the Standing Rock reservation.

“We don’t want this black snake within our Treaty boundaries,” said Standing Rock Sioux tribal chairman Dave Archambault II, who was named in the suit. “We need to stop this pipeline that threatens our water. We have said repeatedly we don’t want it here. We want the Army Corps to honor the same rights and protections that were afforded to others, rights we were never afforded when it comes to our territories. We demand the pipeline be stopped and kept off our Treaty boundaries.”

At least a dozen protesters were arrested last week. However, the demonstrations have continued.

Construction on the pipeline—which will carry up to 570,000 barrels of fracked Bakken oil across four states to a market hub in Illinois—resumed Monday under protection of “armed private security guards…several sheriff’s deputies and about 30 North Dakota Highway Patrol troopers,” according to AP.

Despite this, tribal women reportedly stormed the site and halted construction.

Updates are being shared on social media with the hashtags #DakotaAccessPipeline, #RezpectOurWater, and #NoDAPL.

Supporters have launched a White House petition and legal defense fund to help the resistance effort. Meanwhile, Archambault has specifically called on allies across the country to “call or write your Senators and Representative to stop this blindness and this greed. And, if nothing else… offer a prayer for sensibility and common sense on behalf of all the two-legged that walk as this is not just a Lakota/Dakota issue, this is a human issue.”

The full statement, issued Monday, is below.

The United States via the Army Corps of Engineers is in the mist of moving ahead with an oil pipeline that officials are claiming is not potentially harmful to the Standing Rock Sioux Nation. I am here to advise anyone that will listen, that the Dakota Access Pipeline Project is harmful. It will not be just harmful to my people but its intent and construction will harm the water in the Missouri River, which is one of the cleanest and safest river tributary left in the United States.

We have been told by the officials that there will be breaches in the pipe line, but they claim that the situations are generally never very bad. This is unacceptable.

Our Mother Earth is sacred. All things evolve and work together. To poison the water, is to poison the substance of life. Everything that moves must have water. How can we talk about and knowingly poison water?

Several of our Lakota and Dakota relatives have had visions and dreams. They have been visited in a spiritual sense and have been told that there is a black poisonous snake trying to come among us. Our relatives have said this.

Our instructions say snakes are good – they serve a great purpose in the web of life. Our elders and the elders before them have given us wonderful teachings and a beautiful way to live and co-exist with all that is, however, the black poisonous snake we are being warned about does not come from the Creator. It is man-made and the creature is made of nothing but Greed. There is nothing good that has ever come from Greed. Greed is pure poison. It blinds and twists thinking. It is what my people have endured and continue to endure.

Right now the Rosebud reservation, the Cheyenne River reservation, the Pine Ridge reservation and my Standing Rock reservation represent five of the 10 poorest places or counties in the United States, according to the 2010 Census. Our state of being is not our fault. We did not cause this. United States lawmakers and their policies caused this. Why?? Greed – and now again, even what little we have left is under attack.

Is it too much to respectfully and peaceably request that we not live in fear of being bitten by this creature of eminent harm? Isn’t living in fear and terror unacceptable in the United States?

The United States should use all its will and power to be a real great world leader. It should swear off oil production because we all know it is harmful to it is to our planet. The United States should use all its wisdom and technology to develop alternative sources of power. It should be a great wise leader to preserve and enhance this earth, not knowingly destroy the webs of life.

What I ask is that my fellow American citizens stand with my people to stand with us. I ask you to please call or write your Senators and Representative to stop this blindness and this greed.

And, if nothing else, please, offer a prayer for my people and all the people who are standing with us in prayer. Just offer some thoughts of protection for us. We ask that you offer a prayer for sensibility and common sense on behalf of all the two-legged that walk as this is not just a Lakota/Dakota issue, this is a human issue.

This land that is being disturbed was once ours. Our people, our Indian Nations lived and governed our peoples all over this territory. This land across the Cannonball River that is now threatened was forcibly taken from us and there was nothing that we could do about it then and now.

Nonetheless, we still believe that we are the keepers of this beautiful land. Although it was taken from us, we know, we must stand and speak on this land’s behalf. We want everyone and the federal government to respect this land and take care of it. That is why our people are standing up and standing with the land and water. We have to be here. It is instructions that the Creator has given us. We have to be here. We have to stand to protect ourselves and those cannot speak for themselves.

When the President of the United States came to Cannonball, I did not ask him for anything. I tried to let his wife, Michelle and him, see for themselves a little of our reality. They saw our people in our happiest times, singing and dancing, but they also heard the tough reality of life for so many of our youth.

I believe both were impacted but knowing what I know now, I wish I would have asked President Obama to help us in this struggle.

I will pass away someday, which is all part of the Creator’s plan, but I have a son and daughter. I have no doubt that they will give me grandchildren. What will we leave for our grandchildren? Poisoned water? The substance of Life! In my language, we describe water as the source of Life. We say Mni Wiconi!

My Tribe asks how can we live with ourselves if we don’t respect the rights and needs of our future generations?

Today I realize that everything happens for a reason. Although I didn’t ask the President for a dime, I see our people are peacefully speaking out in a good way now. This is hugely important to my Tribe and all of our Tribal Nations. This peaceful demonstration is a cry to stop the desecration of land and water.

I pray that the powers that be, hear our prayer because all this behavior we are exhibiting is a prayer on our part.

Thank you for listening and enjoy your families, your children and grandchildren.

First published in CommonDreams. This work is licensed under a Creative Commons Attribution-Share Alike 3.0 License. 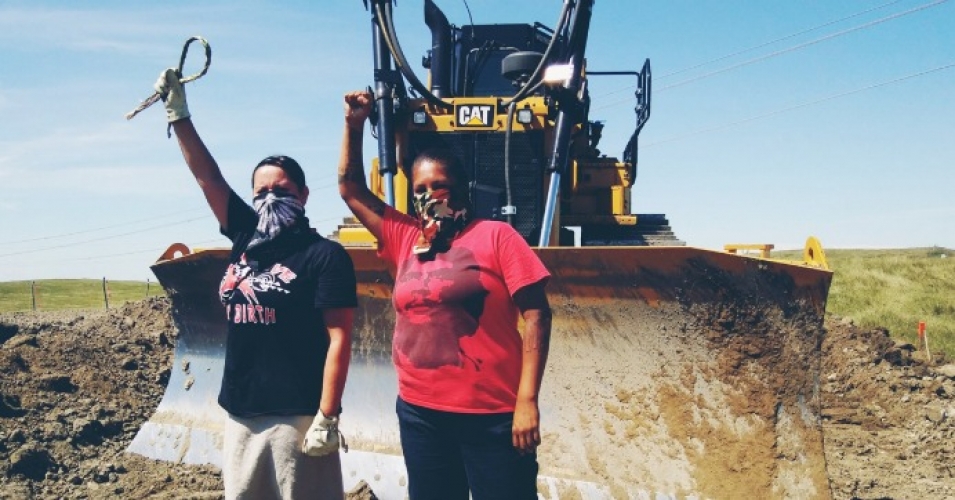