‘What is truly remarkable about these results is that they were achieved at a time when fossil fuel prices were at historic lows.’

Renewable energy boomed in 2015, a year that saw fossil fuel prices plummet and ended with a historic climate agreement hammered out in Paris.

In fact, investments in renewables such as wind and solar were more than double the amount spent on new coal and gas-fired power plants in 2015, according to the Renewables Global Status Report (pdf) from REN21, an international non-profit association based at the United Nations Environment Programme in Paris, France.

“What is truly remarkable about these results is that they were achieved at a time when fossil fuel prices were at historic lows, and renewables remained at a significant disadvantage in terms of government subsidies,” said REN21 executive secretary Christine Lins. “For every dollar spent boosting renewables, nearly four dollars were spent to maintain our dependence on fossil fuels.”

Strikingly, last year marked the first time that developing nations invested more in renewable energy than richer countries did—$156 billion in 2015, a 19 percent increase on the year before, and more than all richer nations combined.

“Countries are opting for renewables because they are not only the most environmentally sound, but also the cheapest option,” Lins said. “It’s a clear signal of its economic viability.”

Bloomberg notes that Europe, on the other hand, “is losing its status as a global leader in clean energy, with investment in the region plummeting 21 percent last year.” Renewable energy investment in developed countries as a group declined by 8 percent in 2015.

But in the United States, renewable energy investment increased by 19 percent to $44.1 billion, the country’s largest increase in dollar terms since 2011.

“Globally, renewable electricity production in 2015 continued to be dominated by large (e.g., megawatt-scale and up) generators that are owned by utilities or large investors,” according to REN21.

However, the assessment points out:

“At the same time, there are markets where distributed, small-scale generation has taken off, or is starting to do so. Bangladesh is the world’s largest market for solar home systems, and other developing countries (e.g., Kenya, Uganda and Tanzania in Africa; China, India and Nepal in Asia; Brazil and Guyana in Latin America) are seeing rapid expansion of small-scale renewable systems, including renewables-based mini-grids, to provide electricity for people living far from the grid. Developed countries and regions—including Australia, Europe, Japan and North America—have seen significant growth in numbers of residential and industrial electricity customers who produce their own power.”

Responding to the report, Friends of the Earth UK campaigner Andrew Pendleton told The Independent: “It should be a source of deep shame that Britain is being outspent by many other industrialized and developing nations in renewables when, as a windy island, we have a clear competitive advantage.

“If Britain,” he continued, “with our almost unrivalled natural resources, isn’t the right place to invest in renewables then where is? If now is not the right time, when will be? Governments have to create the right investment climate and it’s clear that currently ours isn’t.”

First published in Common Dreams. This work is licensed under a Creative Commons Attribution-Share Alike 3.0 License. 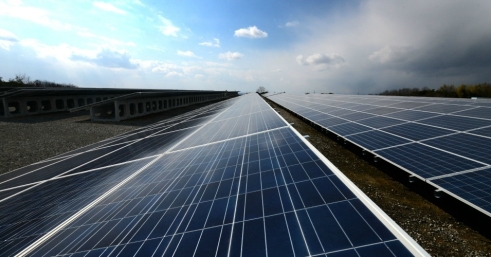 Last year, the solar PV market was up 25 percent over 2014 to a record 50 gigawatts, lifting the global total to 227 gigawatts. (Photo: minoru karamatsu/flickr/cc)