The artifice of corporate totalitarianism has been exposed. The citizens, disgusted by the lies and manipulation, have turned on the political establishment. But the game is not over. Corporate power has within its arsenal potent forms of control. It will use them. As the pretense of democracy is unmasked, the naked fist of state repression takes its place. America is about—unless we act quickly—to get ugly.

“Our political system is decaying,” said Ralph Nader when I reached him by phone in Washington, D.C. “It’s on the way to gangrene. It’s reaching a critical mass of citizen revolt.”

This moment in American history is what Antonio Gramsci called the “interregnum”—the period when a discredited regime is collapsing but a new one has yet to take its place. There is no guarantee that what comes next will be better. But this space, which will close soon, offers citizens the final chance to embrace a new vision and a new direction.

This vision will only be obtained through mass acts of civic mobilization and civil disobedience across the country. Nader, who sees this period in American history as crucial, perhaps the last opportunity to save us from tyranny, is planning to rally the left for three days, from May 23 to May 26 at Constitution Hall in Washington, D.C., in what he is calling “Breaking Through Power” or “Citizen’s Revolutionary Week.” He is bringing to the capital scores of activists and community leaders to speak, organize and attempt to mobilize to halt our slide into despotism.

“The two parties can implode politically,” Nader said. “They can be divided by different candidates and super PACs. But this doesn’t implode their paymasters.”

“Elections have become off-limits to democracy,” he went on. “They have become off-limits to democracy’s fundamental civil community or civil society. When that happens, the very roots shrivel and dry up. Politics is now a sideshow. Politics does not bother corporate power. Whoever wins, they win. Both parties represent Wall Street over Main Street. Wall Street is embedded in the federal government.”

Donald Trump, like Hillary Clinton, has no plans to disrupt the corporate machinery, although Wall Street has rallied around Clinton because of her predictability and long service to the financial and military elites. What Trump has done, Nader points out, is channel “the racist, right-wing militants” within the electorate, embodied in large part by the white working poor, into the election process, perhaps for one last time.

Much of the left, Nader argues, especially with the Democratic Party’s blatant rigging of the primaries to deny Bernie Sanders the nomination, grasps that change will come only by building mass movements. This gives the left, at least until these protofascist forces also give up on the political process, a window of opportunity. If we do not seize it, he warns, we may be doomed.

He despairs over the collapse of the commercial media, now governed by the primacy of corporate profit.

“Trump’s campaign has enormous appeal to the commercial mass media,” Nader said. “He brought huge ratings during the debates. He taunted the networks. He said, ‘I’m boycotting this debate. It’s going to cost you profit.’ Has this ever happened before in American history? It shows you the decay, the commercialization of public elections.”

The impoverished national discourse, fostered by a commercial mass media that does not see serious political debate as profitable and focuses on the trivial, the salacious and the inane, has empowered showmen and con artists such as Trump.

“Trump speaks in a very plain language, at the third-grade level, according to some linguists,” Nader said. “He speaks like a father figure. He says, ‘I’ll get you jobs. I’ll bring back industry. I’ll bring back manufacturing. I’ll protect you from immigrants.’ The media never challenges him. He is not asked, ‘How are we going do all of this? What is step one? Step two? Is the White House going to ignore the Congress and the courts?’ He astonishes his audience. He amazes them with his bullying, his lying, his insults, like ‘Little Marco,’ the wall Mexico is going to pay for, no more entry in the country by Muslims—a quarter of the human race—until we figure it out. The media never catches up with him. He is always on the offensive. He is always news. The commercial media wants the circus. It gives them high ratings and high profit.”

The focus on info-entertainment has left not only left the public uninformed and easily manipulated but has locked out the voices that advocate genuine reform and change. [read complete article] 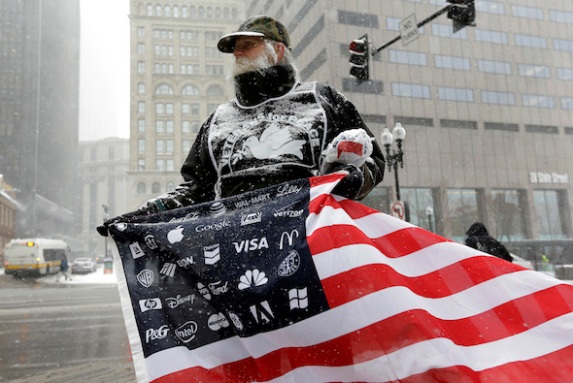