When we were college students in Dallas in the 1970’s, my friends and I lived off college loans, the GI bill, and handouts from our parents. We were broke. So once a week, my girlfriend Linda and I would have a potluck dinner, in the literal sense of potluck: that is, we had a pot and we were lucky to have friends.

Linda, despite being only 21, was something of a magician when she baked. With a little flour, water, shortening, sugar, baking powder, and fruit, she could make a lovely pastry in our ancient unreliable gas oven.

Each guest would bring whatever he or she had in the refrigerator or could afford to buy on the way to our apartment. One might bring a bunch of celery, another would bring a few carrots or potatoes. Someone else might have a can of beans, tomato sauce or Campbell’s soup. Inevitably, our friend John Tieman, whose poverty was legendary, could afford to bring only a grateful smile and an entertaining story — and that was enough. And being the early 70’s, there was always rock and roll blasting from the stereo, as well as a joint being passed around – after all, we had our priorities.

I usually had onions, garlic, olive oil, and basic spices such as oregano, basil, bay leaf, rosemary, tarragon, salt and pepper, as well as a frying pan and a big iron pot. I’d buy a loaf of good bread and a wedge of supermarket cheese, sneak a few figs from a neighbor’s tree that hung over the fence, and a bunch of us would have dinner together.

I’d chop and saute’ the onions and garlic and put them in the pot with the chopped vegetables and other donated ingredients. I’d add the spices and a pint or two of water or other liquid, bring the pot to boil for five minutes, and turn down the heat to simmer for an hour.

Somehow, this improvisation always turned into a tasty vegetable soup. Depending on what was available, I might make carrot and parsnip soup, onion soup, or everyone’s favorite, beer and potato soup.

Following Julia Child’s advice, I’d give the dish a French name and serve it with pride. Linda, who actually spoke French, would coach me on the pronunciation because the little I spoke was purely for show:

“Ladies and gentlemen, this evening we are having potage au brocoli served with a hearty bread and an amusing cheddar. For dessert we have Linda’s Tarte a la Normande topped with fresh figs from our neighbor’s garden.”

Forty years later, John Tieman swears I’m a great cook because of those dinners, but in those days I actually knew how to cook only one thing: potluck soup with a different name each week. 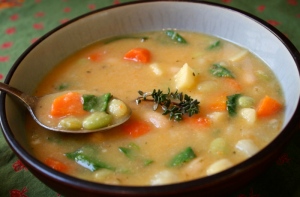 This entry was posted on April 6, 2016 by Vox Populi in Health and Nutrition, Humor and Satire, Note from the Editor, Personal Essays and tagged Michael Simms, Potluck Soup, The Vegan Kitchen.