On January 19, 1894, the Wheeling Daily Register published the following story:

“John Hardy, for killing Thomas Drews, both colored, was hung at 2:09 p.m. today. Three thousand people witnessed his death. His neck was broken and he died in 17 ½ minutes. He exhibited great nerve, attributed his downfall to whiskey, and said he had made peace with God. His body was cut down at 2:39, placed in a coffin, and given to the proper parties for interment. He was baptized in the river this morning. Ten drunken and disorderly persons among the spectators were promptly arrested and jailed.”

As with most folk songs, it is not known who penned the verses that would become one of the most popular murder ballads ever written. The ballad tells the story of John Hardy, a West Virginia outlaw who was hanged in 1894 for killing a man over a 25-cent gambling debt. During the early part of the 20th century, dozens of versions of the Hardy ballad circulated, but after the famous Carter Family recording, everyone from Johnny Cash to Bob Dylan used their version which became a regular part of Doc Watson’s repertoire: 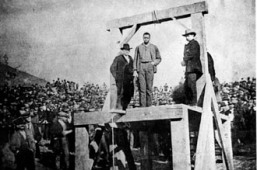 Photo of John Hardy before his Hanging

This entry was posted on October 10, 2015 by Vox Populi in Music and tagged Bluegrass, Doc Watson, Earl Scruggs.