Gregory D. Curtis: The Camp of the Saints

Although it seems to barely register in the US, the refugee/immigration crisis in Europe dominates both the headlines and everyday conversation on the Continent. The specter of 500,000 desperate people(1) fleeing the horrors of the Syrian war and other catastrophes – and with who-knows-how-many hundreds of thousands more coming along behind them – has aroused strong emotions and caused consternation among the EU governments.

The crisis may seem to have arisen suddenly and out of thin air, but in fact exactly such a calamity was predicted more than forty years ago by French novelist Jean Raspail. The Camp of the Saints was published in France in 1973 and caused an immediate sensation. In the novel, set in the early 21st century (i.e., now!), a vast armada of creaky vessels bears down on the Mediterranean coast of Europe bearing no fewer than one million desperately poor Indians from Calcutta. Europe holds its collective breath, wondering where the masses will come ashore.

The problem, of course, is the sheer scale of the “invasion.” Although the masses are poor and unarmed, there are so many of them that they threaten not just to overwhelm Europe’s welcome mat, but to destroy the European economy and, perhaps, European civilization itself.

What Raspail is doing is presenting us, in the most extreme way, with a dilemma of some importance. He is posing the question, “What is it that makes a civilization worthwhile, that makes it worth preserving, defending, dying for?” Of course, every society thinks it’s worth preserving, but many of those societies are surely wrong.

Consider the Soviet Union. While Russian civilization boasts many glories, once the country devolved into the USSR what was its argument for continued existence? Initially, the argument had to do with the creation of a society in which everyone would be equal. But the country soon decayed into a brutal dictatorship focused on murder-by-economic-restructuring, murder-by-show-trial, the attempt to export Communism to other societies by violence. Was the Soviet Union a civilization worth preserving? Few outside the European Communist Parties and the US universities would think so, and, indeed, the USSR would collapse barely fifteen years after Raspail’s novel appeared, its disappearance unlamented.

But what about European civilization? What makes it worth preserving? We might each have our own answers to that question, but Raspail offers a compelling one: because it cares about its weakest members. Western Europe – and its offspring, the US, Canada, etc. – is worth preserving because it cares about human dignity, human justice, the rights of the fragile and the oppressed. It is a civilization that is prepared to take from its strong and successful members and give to its weakest members: the poor, the infirm, the elderly, the very young.

Of course, everything is a balance. Give too little to the society’s weakest members and the society isn’t worth preserving. Give too much and the society will collapse and everyone will be poor, weak and oppressed. European and European-like societies will draw this line, weigh this balance, slightly differently, but it’s a balance that must be found.

But suppose, says Raspail, that these acts of generosity happen in circumstances that threaten the very existence of the civilization itself? In other words, suppose that the very act of the society in welcoming and providing succor to masses of poor will itself destroy the society? This could happen in various ways. The sheer number of poor could overwhelm Europe’s economy, causing economic chaos and dislocation. The huge influx of different-looking, differently-cultured, uneducated people could cause massive social disruption.

In Europe, which had no immigration issue to speak of (2) and hardly any poor population, The Camp of the Saints was taken very seriously. It was debated and praised and condemned. Raspail, an admitted “man of the right” and an opponent of immigration into Europe, won prizes and was very nearly elected to the Académie française, which awarded him its prestigious Jean Walter Prize for the entire body of his work. The famous playwright, Jean Anouilh, whose play, Antigone, had attacked Vichy France, described the novel as, “A haunting book of irresistible force and calm logic.”

But a few years later, when the book was translated into English (by the renowned translator, Norman Shapiro, of Wesleyan University) and brought out by a reputable publisher (Scribner), The Camp of the Saints was excoriated. America had a big immigration issue (albeit Latinos and Asians, not Indians), and its legacy of slavery made us acutely sensitive to any hint of discrimination and racism. As a result, the novel was widely dismissed in the US as a racist nightmare. Time magazine, for example, not only excoriated it in a one-paragraph review as a “bilious tirade,” but felt obligated to justify even mentioning it, which it did only because the novel “arrives trailing clouds of praise from French savants.” Former Senate candidate Linda Chavez, no fan of illegal immigration, called the book “racist, xenophobic and paranoid.”

But back to The Camp of the Saints. In the novel, the appearance of the vast armada naturally raised the question of how Europe should respond. We needn’t have read the book (I remember reading the English version nearly thirty years ago) to anticipate the range of suggested actions. Right-wing partisans of European civilization offered a simple solution: the various European navies(3) would be sent out to intercept the fleet and force them to turn back. Any boats that didn’t would be sunk, and the rest would quickly get the message. Problem solved. (Problem solved, that is, but only with the loss of hundreds or perhaps thousands of lives.)

But elite opinion in Europe lay far to the left of this. Politicians, academic leaders, unionists, and the media welcomed the vast horde. Why? According to Raspail, the answer is simple – elite opinion in Europe despised itself, felt that there was nothing in European civilization worth defending. By the time the broad public, which certainly didn’t want to think of itself as inhumane, realized the danger, it was too late, European civilization had died.

At the end of the novel the narrator is mailing his dispatches in from Switzerland, the last redoubt of civilized society, although the Swiss realize their days are numbered. And, of course, if a flotilla can sail from Calcutta to Europe, it can also sail from Calcutta to America, so that society, too, is in extremis. Western society has devoured itself and the wretched masses of poor have found themselves in a world no better than the one they so desperately left.

(1) To say nothing of 2 million more refugees held in camps in Turkey, which has already spent almost $6 billion on humanitarian assistance for them. Turkey doesn’t consider these people to be “refugees,” and discrimination against the Syrians is rampant.

(2) France did have a creaky guest worker program that ended when the jobs dried up, about the time Raspail was writing.

(3) Raspail quaintly imagined that Europe would still have navies in the 21st century. In fact, of course, the Europeans spent that money on themselves, leaving the defense of the Continent to those nasty Americans. 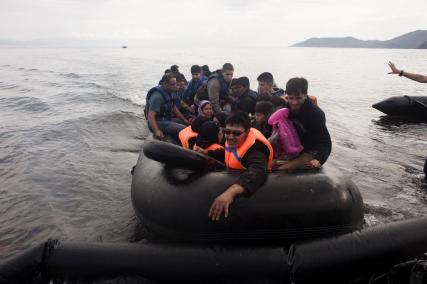 Refugees arrive on the Greek island of Lesbos, after crossing the Aegean sea from Turkey. Getty Images.

This entry was posted on October 9, 2015 by Vox Populi in Opinion Leaders, Social Justice, War and Peace and tagged Gregory D. Curtis, Jean Raspail, refugee crisis in Syria and Europe, The Camp of the Saints.