Daniel N. White: The Fish Rots from the Head — My Q&A with Admiral William McRaven

A strange turn of fate now makes Admiral (retired) William McRaven, formerly head of US Special Operations Command (SOCOM), a neighbor of mine. He’s the new Chancellor of the University of Texas (UT) system, and consequently he gives the occasional public speech. I went to his latest, one for the UT Liberal Arts Honors Program, the Plan II alumni, to see what the Admiral was saying these days.

The lecture itself was no great shakes. McRaven recycled one of his stock presentations he gave to civilians back in his four-star days about what SOCOM is and why special ops are the greatest thing since sliced bread. Not. He relied on PowerPoint slides, with some home-grown graphics every bit as ugly as home-grown sin. A four-star command not using the talents of a graphics artist for their PowerPoint artwork shows a profound artlessness and indifference to audience. That’s about par for the course in the military, but not in civilian professional settings, a fact that doesn’t seem to have bothered anyone at UT.

Worse than the graphics was the lack of content. McRaven droned on about chain of command, how special ops can supposedly get things done quickly and get out quickly, with a light footprint, and how that allegedly gives ‘flexibility’ to US policy makers. He also averred several times how special ops is about instructing the host nation’s armed forces about military authority always being subordinate to civilian, and the importance of the rule of law, and how important it was for US military assistance to spread those ideas. It all stunk of bullshit to me. McRaven did claim that the ongoing war in Syria involves our helping good guys (without specifying who they were) to fight against the ISIS/ISIL threat.

McRaven finished his talk, the floor was open for questions, and I got to the microphone first. I asked him the same question with which I’d stumped Congressman Mike McCaul, head of the House Intelligence Committee, at another UT event recently:

Just why exactly are we at war with the Republic of Syria? What sort of injury have they done to us or our country’s interests that warrant our waging a war on them? What are the objectives we seek with our war against them? Who are these good guys you say are fighting against the Assad regime? Every fighter, every organization out in the field in Syria fighting Assad pledges allegiance to ISIS or Al Qaeda—who are these so-called good guys?

McRaven bloviated about how important it was for us to be over in the Middle East because otherwise the threat of ISIS would spread from one country to another, and before you know it the Straits of Hormuz would be closed.

I’d stayed at the microphone, so I came back with:

Excuse me, Mr. McRaven, but didn’t the Vietnam War put an end to the domino theory, not just in Vietnam but everywhere else? And just what are our war objectives in Syria?

More bloviating by McRaven about what bad people ISIS were and what a threat they were to our interests in the area. Still not seeing anyone behind me at the mike, I asked him:

Then why are we at war with the Assad regime, which is the agency doing most of the fighting against ISIS and Al Qaeda? Why are we fighting them instead of supporting them?

Even more bloviating about what a bad bunch of people the Assad folks are and how badly they’d treated their own people, which was a genocide.

So I pressed my case with one last question:

Excuse me, Mr. McRaven, but there isn’t anything I’ve ever read about any sort of good guys out there fighting against the Assad regime. Every single article for the past two years has said that ISIS and Al Qaeda run the show. Nor can what the Assad regime is doing in its war prosecution be called genocide, not from anything in the public prints. It’s ugly, but it’s war.

McRaven ended by saying, “Well, you just haven’t been reading what I have, from the right sources.” He said this in that belligerent tone people in authority always use when they play this, the final card in their deck of pat answers.

McRaven hadn’t expected tough questions from the audience. Other questioners brought up the failure of US efforts in Libya and how unpopular our wars were making us in the Muslim world. They were good questions, but they didn’t go for the jugular—too much deference; not a lick of outrage. McRaven made a joke about being put on the spot about the wars, and I’d bet this was the first time any UT alumns had ever challenged him on them. Says something, that.

Even so, nobody challenged McRaven on Camp NAMA, and nobody other than me challenged him on our latest stupidity in Syria, a stupidity that’s about to have its fourth birthday. Anyone who was paying attention to my Q&A with McRaven should have realized that McRaven, and by reasonable extension the entirety of the US military senior staff, has no idea of military strategy and no real knowledge of the countries we are at war in. McRaven could no more answer why we are at war with Syria than he can speak Klingon.

Any war without a clear objective is one doomed to failure—no objective, no victory, it’s that simple. Any senior military officer who doesn’t understand this shouldn’t be commanding troops. Recycling the domino theory from the scrapheap of history to justify our current wars. Hunting for ‘good guys’ to fight ‘the bad guys’ as a war strategy, as a policy of state. Jesus. It’s collective US military brain death. Rotting from the head—that’s the US military today.

There’s more to learn here about McRaven, and, by extension, American culture.

As to McRaven, you have to ask why he was hired by UT to be Chancellor. He has no background in education, and everybody knows how maladroit most retired military officers are in civilian employ, so why? There are two reasons: 1) Money. US intelligence agencies spend in excess of $100 billion annually. That’s more than twice what any other country, with the exception of China, spends on their intel agencies and their entire militaries combined. That’s serious money. UT wants to get their share of it so they brought in McRaven for his connections. 2) Deep Politics. McRaven is getting ready for something bigger, a likely next stop being Ted the embarrassment Cruz’s replacement in the Senate. He’s being groomed by the powers that be in this country, the folks in the top floor corner offices in 50-story high-rises. In his case, however, UT Chancellor isn’t so much a stepping stone as it is a laundry operation for him.

Back when McRaven was theater commander for special ops in Iraq and Afghanistan, he ran his own chain of Abu Ghraib prisons/torture mills, e.g. Camp NAMA, and he got away with it. Doing this makes him a Class-A war criminal. Put him in a black SS uniform in ’46 and he’d be in the dock there at Nuremberg with all the concentration camp commanders, looking at an appointment with the short end of a rope for doing this shit. Jeremy Scahill lays it out in his book, and Anand Gopal gives plenty of firsthand reports in his book too.

Nobody in the US news media has paid any attention to this. They missed the story of JSOC (Joint Special Operations Command) misconduct for all these years and instead gave McRaven large amounts of undue credit for capturing Bin Laden. Nobody at UT on the faculty was smart enough, or concerned enough, to object to having an at-large, if unconvicted, war criminal as Chancellor. If they had any brains, or decency, or self-respect, they would have. They didn’t, not a peep. Nope. McRaven is being washed of all his special ops dirt so that he’ll be clean and shiny for his next assignment. The newsmedia will continue their polish job on McRaven, and hell, if the Texas Longhorns win the NCAA football championship anytime soon look for a “McRaven for President” bus to start rolling.

That’s why McRaven is at UT. He’s sharp in a salesman-type way—talkative and presentable mostly. He’s there to sell the UT system to the national security state while getting the blood and dirt and evil washed off him from his days in our fraudulent dirty war on terror.

Yet all his sales presence and surface respectability and shiny gold braid can’t hide the truth of that old Sicilian folk saying: the fish rots from the head. And turning your eyes away and holding your noses, America, can’t hide that truth.

Daniel N. White has lived in Austin, Texas, for a lot longer than he originally planned to. He reads a lot more than we are supposed to, particularly about topics that we really aren’t supposed to worry about. He works blue-collar for a living–you can be honest doing that–but is somewhat fed up with it right now. 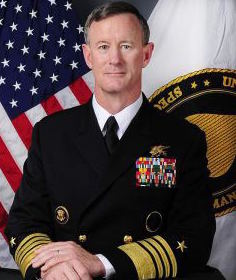