Calling her a “master of the contemporary short story,” the Swedish Academy awarded 82-year-old Alice Munro the 2013 Nobel Prize in Literature.  In 14 story collections, Munro reached generations of writers with her psychologically subtle stories about ordinary men and women in Huron County, Ontario, her birthplace and home. Only the 13th woman writer to win the Nobel, Munro has previously won the Man Booker Prize in 2009, the Governor General’s Literary Award for Fiction in Canada three times (1968, 1978, and 1986), and two O. Henry Awards (2006 and 2008). Munro says that she always meant to write a novel, many in fact, but “there was no way I could get that kind of time,” she said:

Why do I like to write short stories? Well, I certainly didn’t intend to. I was going to write a novel. And still! I still come up with ideas for novels. And I even start novels. But something happens to them. They break up. I look at what I really want to do with the material, and it never turns out to be a novel. But when I was younger, it was simply a matter of expediency. I had small children, I didn’t have any help. Some of this was before the days of automatic washing machines, if you can actually believe it. There was no way I could get that kind of time. I couldn’t look ahead and say, this is going to take me a year, because I thought every moment something might happen that would take all time away from me. So I wrote in bits and pieces with a limited time expectation. Perhaps I got used to thinking of my material in terms of things that worked that way. And then when I got a little more time, I started writing these odder stories, which branch out a lot. 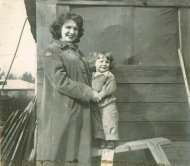 Munro, at home with her daughter Sheila in North Vancouver, in 1954