B. Traven: Fire in the Hole: A New American Military Disaster, Yemen

The Unifed States has spent the last twenty-five years pulling Israel’s and Saudi Arabia’s chestnuts out of the fire in the Middle East. First with Desert Storm in Kuwait in 1990-91, then Iraq in 2003, and now Iraq redux. We’ve made such a hash of these military interventions that only a mixed metaphor will do to describe them: The chickens have well and truly come home to roost because we failed so miserably in our chestnut-pulling.

Our latest colossal failure is in Yemen, where our drone murders (supposedly targeting Sunni Al Qaeda “terrorists” who were bothering Sunni Saudi Arabia) created a vacuum for Iranian-supported Yemenite Shia. Known as the Houthi, they’ve blown right through the vacuum we created, overthrowing the handpicked Saudi president of Yemen, Abd-Rabbu Mansour Hadi.

Yemen, like poor forgotten Libya, now stands as yet another failed American experiment in power projection. We just pulled our embassy and all of our forces out of Yemen and this undoubtedly freaked out the Saudis since Yemen is their next door neighbor. After all the Saudi medieval “Royal” family has always counted on American lives to be put on the line to protect them. So now the repressive Sunni kingdoms of Saudi Arabia, Qatar, and the UAE will have to pull their own chestnuts out of the fire in Yemen. Can they do it? I wouldn’t count on it.

Following our example of using air power rather than “boots on the ground” they think they will defeat the Yemenite Houthi by bombing them to smithereens. Bloody, yes, but not bloody likely. I have a hunch that if the Saudis get up the courage, which is a question, to commit troops, the Yemenite Houthi will make it a costly affair. If the chaos and fighting extends into a protracted war, it will create havoc particularly in Saudi Arabia and Kuwait which both have restive Shia populations.

Already the Saudi air war is creating hatred of the Gulf kingdoms with the collateral damage of dead civilians and destroyed homes. “Death to America” is a common slogan. Of course there are strong words coming from the Saudis to the effect that “We will do whatever it takes to protect the legitimate government of Yemen from falling” and that “A land offensive might be needed to restore order.” (Here one need only recall the abortive Saudi “land offensive” against Iraq during the First Gulf War in 1990-91, in which Saudi chestnuts were badly scorched by Iraqi forces not known for their fire.)

America’s great Nobel Peace Prize leader, Barack Obama, who never misses an opportunity to participate in a military “democracy” saving venture has said we will be supplying “logistical and intelligence support” in Yemen, as we did in Libya. And just see what the result has been there. Total chaos!

Just months ago, Obama was praising America’s efforts in Yemen, its drone strikes and special ops missions, as contributing decisively to the defeat of terrorism there. We’re now witnessing the true fruits of America’s militarized labors.

Whether in Libya or Yemen or Iraq, America intervenes and labors in the name of spreading “democracy,” but what really gets spread is chaos. Doors are smashed down, but it’s radical Islamic militias that surge through them.

That, America, is the true “Surge” in today’s Middle East. Not the Petraeus one in 2007, which proved both fragile and reversible (which Petraeus predicted himself, by the way). The true surge happening in Libya, Yemen, Iraq, and elsewhere in the Middle East is the surge in Islamic extremism driven by the violence of American military action, the latter largely at the beck and call of its Saudi and Israeli masters.

But who is left to pull America’s chestnuts out of the fire? One thing is certain: we’re not going to like it when the chickens finally come home to roost.

copyright 2015 B. Traven. Reprinted by permission of The Contrary Perspective. 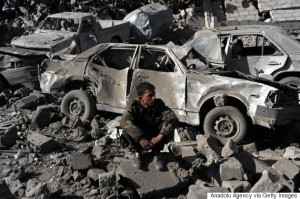 This entry was posted on April 3, 2015 by Vox Populi in Uncategorized and tagged israel, Libya, Mideast war, News and Commentary, Saudi Arabia, US military, War and Peace, Yemen.