Video: Music from a Neanderthal flute

Found by archeologist Ivan Turk in a Neanderthal campsite at Divje Babe in northwestern Slovenia, this instrument made from the femur of a cave bear is estimated to be 43,000-80,000 years old. The flute’s four finger holes seem to match four notes of the diatonic (Do, Re, Mi…) scale.   In the video, Macedonian musician Ljuben Dimkaroski plays a clay replica of the flute.

The prehistoric instrument does indeed produce the whole and half tones of the diatonic scale, so completely, in fact, that Dimkaroski is able to play fragments of several compositions by Beethoven, Verdi, Ravel, Dvořák, and others, as well as some free improvisations “mocking animal voices.”  Dimkaroski says that he figured out how to play the instrument in a dream. 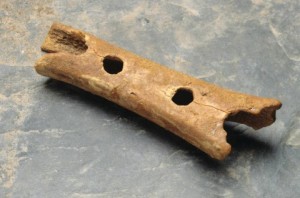 10 comments on “Video: Music from a Neanderthal flute”