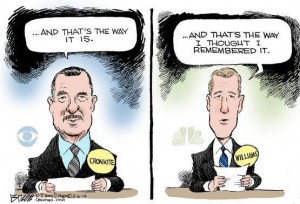 NBC news anchor Brian Williams has been suspended for six months without pay, after falsely claiming that a helicopter he was riding in over Iraq on March 24, 2003 was struck by a rocket-propelled grenade.

The public has been savage in practically demanding the newsman’s crucifixion for telling a “white lie” — for that’s what it was — particularly considering that pretty much — even Geraldo Rivera to Hillary Clinton — has told such lies about themselves, if not necessarily about combat. And isn’t it odd that nobody called for the head of Fox News host and dedicated chickenhawk Bill O’Reilly when he told incredible whoppers about his “combat” experience? He doesn’t actually have any, even as a journalist, and his lies about “my unit” seem to imply that he served in the military (he didn’t).