Now, some might say, “Radical?, King was no radical!” And, in fact, the image all too often projected in our children’s classrooms and in the mass media on MLK Day very seldom involve any suggestion that Dr King was anything other than a great pacifist leader who simply asked people to “get along” and led some non-violent marches to end discrimination.

Where is the mention of his opposition to the Vietnam war and his labeling of his own government, OUR government, as aggressors who waged war to further enrich the ruling class and to enslave the poor and working class?

In what venue across this country, in what newspaper, on what television station, in which schools, will people speak of Dr King’s unending and ever increasing class consciousness as he unceasingly spoke of “freedom for all”?

In 1963, in what can arguably be called his most famous speech, he concluded with the oft-repeated phrase, “I have a dream” and the mass media eventually took that speech, put a bunch of flowers around it, and glorified it forever as a sermon and a prayer.

Yet on April 4, 1967, exactly one year prior to his assassination, he spoke at the famous Riverside Church in New York City before a national meeting of Clergy and Laity Concerned About Vietnam to announce that he had no moral choice but to join with them in opposing the war of aggression being carried out by our government against the Vietnamese people. This speech, far more radical in its class analysis and condemnation of US government policies against the poor in both Vietnam AND around the world than others he had given, is not a speech that those who control our media and educational institutions would have our children know well.

If Dr King were alive today, it is without a doubt that his radical politics would have him join protests against not only the wars in Iraq and Afghanistan, but in also condemning Israel and the US for the genocide being waged today against the Palestinians in Gaza and the West Bank. Unlike the most well-known African American we know today, Barack Obama, King would not and COULD not, because of his moral obligation to humanity, simply watch this slaughter unfold while Obama continues to be silent. He and Barack Obama would be on opposite sides of the table and King would not hesitate to march, as always, on the side of peace and justice. As Dr King often said, his goal was to “save the soul of America”. At no point, unlike our current leaders, did he speak of saving the banks of America.

For in that speech at Riverside Church, he said, “Somehow this madness must cease. We must stop now. I speak for those whose land is being laid waste, whose homes are being destroyed, whose culture is being subverted.”

Dr King did have a dream, a dream and a vision that we could someday live in a world where peace and justice reigned supreme, where we understood that we must be partners in the world with ALL peoples, with ALL nations, with ALL races, and not strive to be their masters.

And to that end, were Dr King here today, I have no doubt that he would be saying to all of us, to our elected representatives, and even to the first African American president with whom he would certainly disagree, these simple two words: NO MORE.

[ed. note: This was originally delivered as a speech at a memorial gathering for Dr King on Jan 17, 2009] 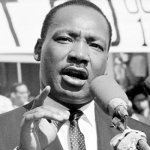