The American people must make a fundamental decision. Do we continue the 40-year decline of our middle class and the growing gap between the very rich and everyone else, or do we fight for a progressive economic agenda that creates jobs, raises wages, protects the environment and provides health care for all? Are we prepared to take on the enormous economic and political power of the billionaire class, or do we continue to slide into economic and political oligarchy? These are the most important questions of our time, and how we answer them will determine the future of our country.

The long-term deterioration of the middle class, accelerated by the Wall Street crash of 2008, has not been pretty. Today, we have more wealth and income inequality than any major country on earth. We have one of the highest childhood poverty rates and we are the only country in the industrialized world which does not guarantee health care for all. We once led the world in terms of the percentage of our people who graduated college, but we are now in 12th place. Our infrastructure, once the envy of the world, is collapsing.

Today, millions of Americans are working longer hours for lower wages. In inflation-adjusted dollars, the median male worker earned $783 less last year than he made 41 years ago. The median woman worker made $1,337 less last year than she earned in 2007. Since 1999, the median middle-class family has seen its income go down by almost $5,000 after adjusting for inflation, now earning less than it did 25 years ago.

The American people must demand that Congress and the White House start protecting the interests of working families, not just wealthy campaign contributors. We need federal legislation to put the unemployed back to work, to raise wages and make certain that all Americans have the health care and education they need for healthy and productive lives.

As Vermont’s senator, here are 12 initiatives that I will be fighting for which can restore America’s middle class.

We need a major investment to rebuild our crumbling infrastructure: roads, bridges, water systems, waste water plants, airports, railroads and schools. It has been estimated that the cost of the Bush-Cheney Iraq War, a war we should never have waged, will total $3 trillion by the time the last veteran receives needed care. A $1 trillion investment in infrastructure could create 13 million decent paying jobs and make this country more efficient and productive. We need to invest in infrastructure, not more war.

The United States must lead the world in reversing climate change and make certain that this planet is habitable for our children and grandchildren. We must transform our energy system away from fossil fuels and into energy efficiency and sustainable energies. Millions of homes and buildings need to be weatherized, our transportation system needs to be energy efficient and we need to greatly accelerate the progress we are already seeing in wind, solar, geothermal, biomass and other forms of sustainable energy. Transforming our energy system will not only protect the environment, it will create good paying jobs.

We need to develop new economic models to increase job creation and productivity. Instead of giving huge tax breaks to corporations which ship our jobs to China and other low-wage countries, we need to provide assistance to workers who want to purchase their own businesses by establishing worker-owned cooperatives. Study after study shows that when workers have an ownership stake in the businesses they work for, productivity goes up, absenteeism goes down and employees are much more satisfied with their jobs.

Union workers who are able to collectively bargain for higher wages and benefits earn substantially more than non-union workers. Today, corporate opposition to union organizing makes it extremely difficult for workers to join a union. We need legislation which makes it clear that when a majority of workers sign cards in support of a union, they can form a union.

The current federal minimum wage of $7.25 an hour is a starvation wage. We need to raise the minimum wage to a living wage. No one in this country who works 40 hours a week should live in poverty.

Women workers today earn 78 percent of what their male counterparts make. We need pay equity in our country — equal pay for equal work.

Since 2001 we have lost more than 60,000 factories in this country, and more than 4.9 million decent-paying manufacturing jobs. We must end our disastrous trade policies (NAFTA, CAFTA, PNTR with China, etc.) which enable corporate America to shut down plants in this country and move to China and other low-wage countries. We need to end the race to the bottom and develop trade policies which demand that American corporations create jobs here, and not abroad.

In today’s highly competitive global economy, millions of Americans are unable to afford the higher education they need in order to get good-paying jobs. Further, with both parents now often at work, most working-class families can’t locate the high-quality and affordable child care they need for their kids. Quality education in America, from child care to higher education, must be affordable for all. Without a high-quality and affordable educational system, we will be unable to compete globally and our standard of living will continue to decline.

The function of banking is to facilitate the flow of capital into productive and job-creating activities. Financial institutions cannot be an island unto themselves, standing as huge profit centers outside of the real economy. Today, six huge Wall Street financial institutions have assets equivalent to 61 percent of our gross domestic product – over $9.8 trillion. These institutions underwrite more than half the mortgages in this country and more than two-thirds of the credit cards. The greed, recklessness and illegal behavior of major Wall Street firms plunged this country into the worst financial crisis since the 1930s. They are too powerful to be reformed. They must be broken up.

10. Bringing Health Care to All

The United States must join the rest of the industrialized world and recognize that health care is a right of all, and not a privilege. Despite the fact that more than 40 million Americans have no health insurance, we spend almost twice as much per capita on health care as any other nation. We need to establish a Medicare-for-all, single-payer system.

Millions of seniors live in poverty and we have the highest rate of childhood poverty of any major country. We must strengthen the social safety net, not weaken it. Instead of cutting Social Security, Medicare, Medicaid and nutrition programs, we should be expanding these programs.

At a time of massive wealth and income inequality, we need a progressive tax system in this country which is based on ability to pay. It is not acceptable that major profitable corporations have paid nothing in federal income taxes, and that corporate CEOs in this country often enjoy an effective tax rate which is lower than their secretaries. It is absurd that we lose over $100 billion a year in revenue because corporations and the wealthy stash their cash in offshore tax havens around the world. The time is long overdue for real tax reform.

© 2014 Bernie Sanders
Bernie Sanders (I-Vt.) was elected to the U.S. Senate in 2006 after serving 16 years in the House of Representatives. He is the longest serving independent member of Congress in American history. Elected Mayor of Burlington, Vt., by 10 votes in 1981, he served four terms. Before his 1990 election as Vermont’s at-large member in Congress, Sanders lectured at the John F. Kennedy School of Government at Harvard and at Hamilton College in upstate New York. Read more at his website. 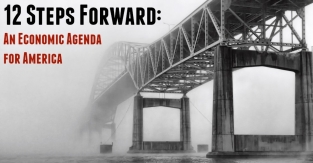 Sander’s newly announced progressive economic agenda is designed to reverse a 40-year decline of the American middle class and the growing gap between the very rich and everyone else in the United States. (Background photo: Randen Pederson/flickr/cc)