Jewish Resistance to the Holocaust 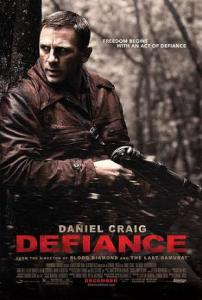 “Defiance” is one of the few mainstream movies that depict Jewish resistance to the Holocaust. Another good movie is “Escape from Sobibor”

In 2006, I presented the following talk on Jewish resistance to the Holocaust.  It’s a dangerous myth, and sadly a common one, that Jewish people did not resist the Nazis in meaningful or effective ways.  From this myth stems a far more insidious one: that Jewish people were somehow complicit in the murderous campaigns against them.  I gave this paper to counter these dangerous myths.

The Nazis exterminated nearly six million Jews during World War II.  Those who claim that Jews went meekly like sheep to the slaughter ignore the many instances of remarkable courage in the face of this staggering crime against humanity.  In reality, Jewish resistance took many forms.  That it often proved futile reflects the poignant vulnerability of Jews rather than any lack…