I realize I quote her as often as Allen Ginsberg
quoted Jack Kerouac, but when she was three
my daughter said, “It’s not crazy—it’s Baltimore,”
then proceeded to improvise better than a lot of adults
a poem I should have written down but didn’t,
being too busy grooving to the way her mind was
moving to the theme of Baltimore, a place
we’d taken her only once. And we didn’t
get to go to anywhere crazy or cool then,
nothing like a punk show at the Marble Bar
if that’s still around, or an evening drinking
at the Rendezvous where I remember line dancing
one night with the neighborhood drunks. No,
we went to see my cardiologist at Johns Hopkins,
then had lunch at California Pizza Kitchen
at the Harbor, then went to the Aquarium—
a quick trip worthy of the most boring tourists
from the suburbs, or the soccer moms
and cubicle dads and vice versa,
yet my daughter sensed there was a thing there,
a beautiful shining city weirdness,
a Baltimore that rhymed with crazy.
And I am immeasurably moved to be able
to say that it wasn’t Jack Kerouac, or John Waters,
or Divine or Edith the Egg Lady or any of the usual
suspects, but my daughter who first said,
“It’s not crazy—it’s Baltimore,”
and that even though her poem is lost,
we are not,
as we drive west through
the beautiful, aching city to another place
which we, for lack of another word, call home. 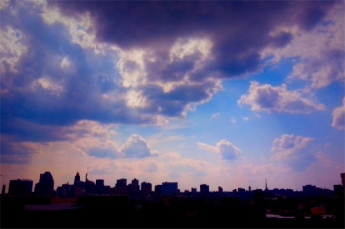 Photograph of the Baltimore skyline by Jose Padua